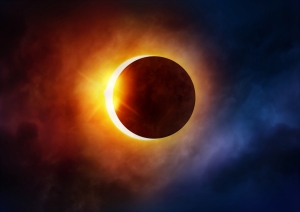 July 24, 2017 (San Diego) -- On Monday, August 21st, a total solar eclipse will pass over the Pacific Northwest affecting California’s solar resources that supply power to the grid. The eclipse is expected to occur from 9:02 a.m. to 11:54 a.m., with the moon obscuring 58 to 76 percent of solar rays, depending on the resource location, and causing a loss of 4,194 megawatts of California large scale solar electricity.

An eclipse website set up by the California Public Utilities Commission states, “While our utilities and grid operator have all the tools necessary to manage the grid during the eclipse, what if millions of Californians stepped in to allow our hard working sun to take a break, rather than relying on expensive and inefficient natural gas peaking power plants?”

Regulators are counting on the power of California’s citizens – though they’ve lined up backup gas generators, just in case.

They’re asking California’s citizens to turn off lights and unneeded electrical devices on August 21st, again that’s from around 9 a.m. to noon. “By plugging into the power of California’s citizens and unplugging from the grid, we can have cleaner air, keep our system reliable, and send a message to the rest of the country that we can do all of that without being forced to rely on fossil fuels as the only foundation of our electricity,” the CPUC site says

So on August 21, let's all get together and pledge to do what we can to reduce our energy consumption and give our hard-working sun a break.

Blame us, the little guys in this fiasco. Make the big energy users reduce their use.