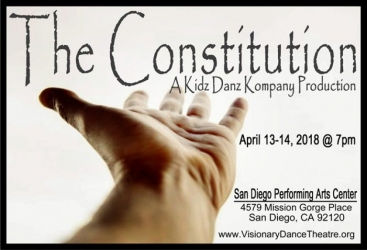 Instead of presenting dance recitals, this dance troupe puts on socially conscious shows. Rather than showing the Constitution from the perspective of the traditional founding fathers, this show shares it from the viewpoint of, “our founding fathers who didn't own slaves,” says artistic director Spencer John Powell, who runs the dance troop based in La Mesa.

This show is about “the Constitution and its impact on our country, from its founding, to its present day, and things such as the 3/5 clause of the constitution which states that African Americans were only 3/5 of a human being,” says Powell, who founded the dance group in the 1990s.

Aubrey Wheatbread, who has a solo for the scene “Revolution,” explains the importance of the show, saying “It is important to learn about the constitution because it is what makes our country great.”

Yasmina Devos will pay homage to Phyllis Wheatley, a freed slave who became a poet during the Revolutionary War era and corresponded with George Washington. Devos tells East County Magazine, “I think that a lot of African American history is lost in time and we only know the general picture. To dive into the rough, sometimes disturbing struggles of my ancestors is important for me.”

Tayler Mexwell-Paganen, who will pay homage to founding father and President John Adams, says, “I think it is amazing how this company is able to talk about topics no one wants to talk about, or, in our case, dance about.”

Ruby Anderson, who has been dancing under Powell for seven years states, “Spencer has given us the stage to express our thoughts through creative movement.”

Anderson says, “Adults assume we have nothing to say because we're kids,” adding, “Visionary not only gave me an outlet to perform, it taught me the importance of speaking my mind, and not underestimating myself.”

“I really enjoy being here because going through the tough topics that we talk about during these performances we strengthen our connection and become more like a family,” said Mexwell-Paganen.

His mother explains that the same is true for the parents, and she applauds Powell for the growth her son has experienced as a result of dancing with the group.

On what to expect if one were to join Kidz Danz Kompany, Wheatbread demonstrates a glissade, or middle leap, and Mexwell-Paganen demonstrates a jete, another dance move.

“Every move has a word, and they're French words because ballet is French,” explains Powell.

On what to expect at a rehearsal, Zain Roth explains, “If it were a rehearsal he would do the move and expect us to do it.”

On what to expect as a new dancer, Gianna May, who has a dance duet in the Constitution says, “Stretch a lot, stretch circles, and then we would change each movement and do that together.”

Find out more about classes here.

As for the production of The Constitution on Friday April 13th and Saturday the 14th, the website concludes, “This work will ask us to be hopeful for the future of our beautiful country and the importance of freedom in America.”

For tickets (available online through March 31) and more information, visit http://visionarydancetheatre.org/Visionary/2018-TheConstitution. Tickets will also be available at the box office if not sold out in advance.