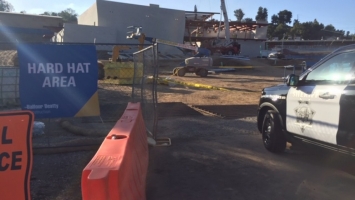 October 9, 2019 (Spring Valley) – A construction worker has died after an industrial accident this afternoon at Monte Vista High School in Spring Valley, says Sergeant Matt Cook with the San Diego Sheriff’s department.  According to ECM news partner 10 News, the accident occurred just hours after the topping off of the new multi-use facility at the school.

Sheriff’s deputies and the school’s resource office responded at 2 p.m. to the accident at a construction site on campus, where the 30-year-old man had fallen from a beam attached to a 30-foot-high platform.

Deputies and fire department personnel attempted first aid and CPR before transporting the victim to Grossmont Hospital, where he was declared dead on arrival.

The California Occupational Safety and Health Administration (OSHA) was notified and responded to the scene; the agency will conduct a follow-up investigation.

“Because the industrial accident was potentially witnessed by other construction workers, high school students and high school staff, crisis counselors will be available” tomorrow on the Monte Vista campus, Sgt. Cook says.