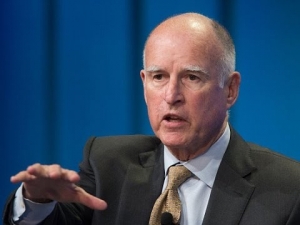 March 15, 2016 (Santa Monica) – Consumer Watchdog, a nonprofit organization, has filed a complaint with the Fair Political Practices Commission contending that Governor Jerry Brown’s top aide, Nancy McFadden, broke state law by owning up to $1 million in stock in her former employer, Pacific Gas & Electric, and using her official position for personal financial benefit by intervening to inflate the company’s stock price.  She also reportedly failed to appropriately disclose the timing of her PG&E stock sales.

Read the complaint at: http://www.consumerwatchdog.org/resources/mcfaddenfppccomplaintcpuc.pdf

Emails produced by the Public Utilities Commission through Public Records Act requests show that former PG&E lobbyist Brian Cherry, fired by the utility in the wake of the San Bruno corruption scandal and former PUC President Michael Peevey, currently under criminal investigation with Cherry, tapped McFadden as the Governor’s representative to rescue plummeting PG&E stock. The emails finger McFadden as the arranger of the appointment of a pro-utility Commissioner to the PUC that sent a reassuring signal to Wall Street and lifted PG&E’s stock value, including McFadden’s holdings.

Jamie Court, president of Consumer Watchdog, states in a press release,“Ms. McFadden has a duty to prove she recused herself from PG&E decisions or she should resign. Public officials who hold hundreds of thousands of dollars in stock options in a utility that employed them need to create a clear record for their colleagues that they will not participate in decisions that affect the value of their stock.” He adds, “ The Governor’s top aide sets the ethical tone for the entire Administration.”

California law prohibits any public official from using his or her official position to influence a governmental decision in which the official has a known financial interest.

McFadden was also the point person in the Governor’s office for all legislative matters and did not create a record of recusal on legislative or other matters related to PG&E, according to Governor Brown’s response to a Public Records Act Request filed by Consumer Watchdog.

Mike Aguirre is a San Diego attorney who has won Public Records Act victories over the PUC, forcing the PUC to make public emails from Governor Brown regarding the PUC corruption scandal.

Aguirre states, "Nancy McFadden's involvement while having a financial interest in PG&E shows that Wall Street's hold over utility regulators in California extends beyond the PUC to the Governor's Office. Neither the PUC, nor the government appear to represent the interests of the ratepayers.”

Emails between then-PUC Chair Michael Peevey and PG&E lobbyist Brian Cherry called McFadden the utility's "back door route" and go-to person in the Governor's office. McFadden had been PG&E’s Sr. VP for Governmental Affairs and left the company with $1 million in severance pay in addition to the stock.

During the first weeks of the Brown Administration, on January 27, 2011, in wake of the PG&E deadly San Bruno gas pipeline explosion, emails released under the Public Records Act show Cherry forwarding Peevey a PG&E roundup of a Wall Street downgrade of Edison International and PG&E stock from “buy” to “hold.” Cherry voiced concerns that investors feared two appointments by the Governor may have “swung the Commission too far in the consumer-oriented direction.”

In another email, Cherry suggested that commission appointments should be handled via a “back door route”, adding, “I’d be happy to do that with Nancy, but I’m not sure a letter would be advantageous to you given the mess around San Bruno, et al. Your choice.”

The complaint also states that many pieces of legislation relating to PG&E were debated in the state during 2011 – 2012, when McFadden held stock in PG&E.  Many would have affected the value of her stock. One was aimed at her personal economic interest, AB 861, which would have required former utility executives like McFadden to return incentive pay in the wake of fines related to disasters like the San Bruno explosion.

McFadden received a $1 million payout from PG&E as she left for the Governor’s office, according to SEC filings.  Brown signed the legislation but the provision relating to requiring former executives like McFadden to return special compensation was amended out of the bill prior to receiving his signature.

McFadden also failed to accurately account for her trades in PG&E stock as required by state law, concealing the dates of her stock trades and their amount, which could reveal insider trading, the Consumer Watchdog complaint alleges. A press release from the consumer group states, “The inaccuracies and omissions prevent the public from knowing when she made her sales, which is critical given that she had inside information about the investigation into the San Bruno explosion, which had a material impact on a volatile stock.”

The complaint states, “The FPCC investigation of Ms. McFadden’s role is vital to the public interest because it may have broader implications. A Superior Court judge in San Francisco has already determined there was probable cause to believe that there were felonies committed involving one of the parties to the email communications above, Mr. Peevey. His home was the subject of a search warrant in which evidence was uncovered about an agreement to make ratepayers to pay for the failed San Onofre Nuclear Power Plant.”

A spokesman for Governor Brown disputed the allegations, the Los Angeles Times reports.  Evan Westrup, a spokesman for the Governor, stated, “Nancy did not play a role in the decisions you’re asking about while she had those holdings.” He added, “This filing is riddled with inaccuracies and has no merit.”