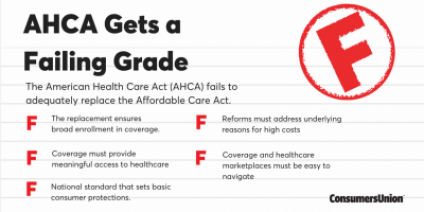 March 18, 2017 (Washington D.C.) — Consumers have long relied on information from Consumers Union regarding testing and rating of products from appliances to cars.  Now, Consumers Union has issued a report card for the new healthcare bill proposed by Congressional Republicans, which scored an “F” in every category rated.

Robert Gardner, Consumers Union, Policy and Action from Consumer Reports, states, “It’s important for people to know the facts, because this bill would have devastating consequences. Our analysis tracks with what other independent reviewers found this week: tens of millions would be kicked off of their insurance and costs for consumers would skyrocket. This isn’t the healthcare that Americans deserve.”

Consumers Union ranked the American Health Care Act (AHCA), the proposed replacement for the Affordable Care Act or Obamacare. It scored an F in all five categories, specifically, ensuring broad enrollment in coverage, providing meaningful access to healthcare, having a national standard that sets basic consumer protections, addressing underlying reasons for high costs of healthcare, as well as coverage and healthcare marketplaces that are easy to navigate.

“There are already signs that this flawed proposal is on its last legs — widespread criticism on both sides of the aisle and intense opposition from constituents at town hall meetings. Let’s deliver the final blow and demand Congress to scrap this failing proposal,” Gardner advises consumers.

consumer reports backed obamacare 100% even though it destroyed coverage and care for millions. the board are all have far left political opinions. believe a word that comes from that publication at your own peril.

that seems to be the most likely avenue for medical care law. The catastrophic price increases coming under Obamacare in 2017 can't be fixed easily so the increasing likelihood is that the Repubs would just let it implode. That idea was also pushed recently by Sen. Lindsey Graham (R-S.C.). On Hugh Hewitt's radio show, Graham suggested letting Obamacare "collapse" on its own. "Here’s what I would prefer he do," Graham said of Trump. "If he can’t get us in a good spot where we all feel comfortable, we’ve improved Obamacare dramatically, which we told people we would: Let it collapse."