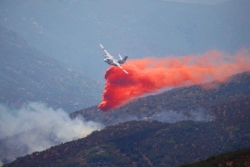 Update 2:00 p.m. - "This fire is now out," Cal-Fire Nick Schuyler informed East County Magazine." It was a great stop by multilple agencies working together."  The fire was contained at 100 acres; cause is still under investigation. Firefighters will remain on scene through the night mopping up hot spots.

August 25, 2010 (San Diego’s East County) 12:45 p.m.  A 100 acre wildfire is burning in Cleveland National Forest. The blaze started at 10:30 a.m. near Four Corners in the Barona Mesa area, Cal-Fire reports.  Incident Page Network reports the fire is also near the glider port in Ramona, in the vicinity of Wildcat Canyon and Painted Rock, with access at San Diego Country Estates.

The fire, fueled by an east wind, is under U.S. Forest Service Command. Forward spread is stopped but the blaze is not contained. Five airtankers and a very large air tanker (VLAT) from Victorville are battling the blaze along with 10 fire engines, 10 fire crews, 4 helicopters, 4 helitankers, 4 water tenders and two bulldozers.

If you are not yet signed up to receive our free wildfire and emergency alerts via email, sign up at the top right side of our homepage.