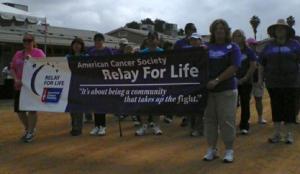 February 19, 2011 (Lakeside) -- The American Cancer Society is holding a meeting to begin organizing the second annual Relay for Life in Lakeside on February 28, 2011.

The public is invited to learn about opportunities for participation, pick up Relay for Life materials, and learn about the American Cancer Society’s programs and services.

The first Relay for Life began in 1985 in Tacoma, Washington when a single man, Dr. Gordy Klatt, walked to raise money for the American Cancer Society. Since then it has grown to an annual event in which more than 3.5 million people in 5,000 locations across the country gather for what has become the ACS’s primary fundraising event.

2010 was the first time a Relay was held in Lakeside, including a Survivor’s Lap and a Luminaria ceremony as well, at which more than $25,000 was raised.

Kudos to the organizers of this event. Cancer is the next great conquest of medicine and lets hope we can beat it!!