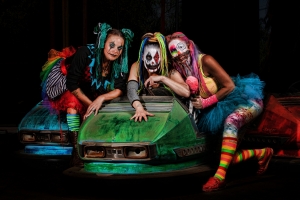 October 17, 2019 (El Cajon) -- The Scare Trail at The Haunted Amusement Park, located in the long-deserted Marshal Scotty’s Playland Park in El Cajon, is the perfect setting for chilling thrills during this Halloween season. You have until Oct. 31 to scare yourself silly before they close.

The Scare Trail is creepy--even during the day. The actors, who perform at night, are very effective.

“Haunting--what we call what we do--is a great outlet for me,” Nick Ewing-Pistelak told ECM. “This year, being at the haunted amusement park, I’m building upon it being an old and rundown park, full of clowns that creep people out.  My character (a clown) is inspired by a clown that’s gone crazy and is fueled by fear,” he said during a phone interview.

Ewing-Pistelak is one of 37 “haunting” actors who interact with park visitors. Previously he worked for Savage House (another seasonal Halloween event now closed) in Mission Valley.

What do “haunting” actors do after the show?

“At the end of the night we compare notes on what our best scare was,” he said. “I mean, that’s when you know you gave them their money’s worth.”

Marshal Scotty’s Playland Park, also formerly known as Frasier’s Frontier, opened in 1967 and closed in 1998. The Scare Trail started in 2015.

“This is our fifth year,” said Vikki Powers.  Powers, along with husband Ryan and business partner Dustin Parr operate the event.  Three families, comprised of Ryan and Vikki Powers (Logan 15, Darby 12), Dustin Parr (Mason 15, Drake 13), and Mac Powers (Jack Powers 14) all help to run it along with the actors and some volunteers.

“We have clowns, dolls, zombies, a contortionist and a dog/wolf boy,” said Vikki Powers. “We’re building a spider maze. We bought some really expensive masks and we have a lot of exhibits.”  The “Blubber Face” mask was $600.

“It’s pretty fun to go thru,” Darby Powers, 12, said of the 3-D bumper car maze (3-D glasses are provided). She helps her mom and dad by assisting at the Ferris wheel with photos and has lent some of her artistic skill with a poster design.

Many locals will have memories of the old playland park. 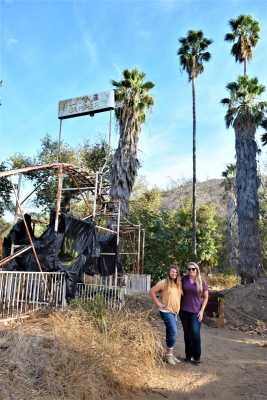 “My cousins’ families were performers here,” said John Powers. “So, all their birthday parties were here.  I grew up two miles from here. I had friends that worked here (Marshal Scotty’s) in high school.”

But during Halloween season the park mutates into a haunted place for fun, and for real.

According to Vikki Powers there is a “real” haunted room in one of the haunted houses. They hosted a medium that confirmed the haunting.

While no park visitors have thrown-up out of fear, there are reports of “pee-the-pants” reactions.

To experience both hauntings you can purchase tickets on site.

Tickets are $18 cash or $19 credit card (ages 5 and under are free.)  They sell "Chicken Sticks" (glow sticks) for the kids and adults who don't want to get too scared.  When an actor sees people with glow sticks, they won't go after them according to Vikki Powers.

A coupon to get $2 off can be had at their Parkway Plaza kiosk. The Scare Trail operates Friday, Saturday and Sunday from 7 p.m. to 10 p.m.  and will be also be open on Wednesday and Thursday, Halloween eve and Halloween night, Oct. 30th and 31st.

Flashlights and cell phone photography are prohibited. Closed-toe shoes are recommended. Costumes are allowed, but no masks.