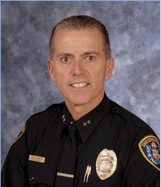 Witt said that Vasquez competed against candidates from outside the organization and proved that he has exceptional qualities that will help him succeed in his new position. Vasquez is currently serving as Assistant Chief of Police with the City of San Diego overseeing the Canine Unit, SWAT, Communications Division, Information Services, Property Room, and the Chief’s Community Advisory Boards. Vasquez will replace La Mesa Chief of Police Ed Aceves, who retired in December 2014 after 30 years of service.

Vasquez began his career with the City of San Diego Police Department in September 1986 as a full-time Police Recruit.  In 1994, he was promoted to Police Sergeant, Police Lieutenant in 1998, Police Captain in 2005 until his promotion to his current position as Assistant Chief of Police in 2013. Throughout his career, his assignments included Patrol, Training Division, Special Events, Human Resources, Internal Affairs, and Operational Support.

In 2007, Vasquez attended the FBI National Academy in Quantico, Virginia, a 10-week leadership program established by the FBI to provide training and networking opportunities to local and state law enforcement agencies. Vasquez received a bachelor’s degree in business management.

Vasquez is well known throughout the law enforcement community in the San Diego region and comes to La Mesa with high recommendations from his peers.  Vasquez has demonstrated through the selection process that he will be highly qualified to meet the objectives and goals of La Mesa in addressing public safety issues and in the continued development of a highly professional and community-oriented Police Department for La Mesa’s future.

La Mesa’s new police chief was born and raised in San Diego, and graduated from Helix High School.  He and his wife reside in El Cajon where they raised their son and daughter.

“Mr. Vasquez participated in a very thorough application process that attracted a wide range of candidates inside and out of the region.  I have every confidence that Mr. Vasquez is the most qualified candidate for La Mesa’s new Chief and will provide the energy and professional commitment needed to be successful in his new role at La Mesa,” Witt said.