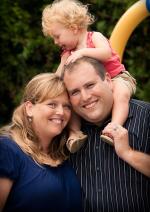 In Part Five of this series on election races in La Mesa, East County Magazine spotlights City Council candidate Ian Shiff. For this series we asked all candidates the same set of questions on local issues, with an open invitation to bring up anything else they would like to discuss at the end of the session.

September 15, 2010 (La Mesa) – City Council Candidate Ian Shiff and his family moved to La Mesa five months ago, because they like the community feeling. They bought their first house here and plan to raise their children, now three months and two years old, in the City.

Shiff grew up on the East Coast, where he graduated in 1999 with a major in Mass Communications and a double minor in Information Technology and Marketing.

For two years he produced a political news show in Road Island. Nearly ten years ago, , he came to San Diego and produced Fox in the Morning for what was then Fox 6 (now KSWB).

He said his education gave him special insight into the link between news and sales, so his days were long. He changed fields, going into the mortgage industry and real estate. He worked at GMAC Mortgage for a year and a half, followed by a year at Trader Electronic media.

Shiff currently works at Websense, a company listed on the NASDAQ, and travels about 40% of the time, since his territory is San Francisco, Sacramento and Silicon Valley. 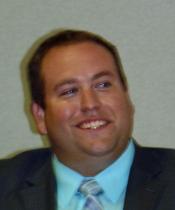 Now that he’s settled here, he has a vested interest in the City and wants to make the community something he’ll be proud of, he told ECM. “I know that I’m going to be here a long time. I love places that feel like a true community. I want to feel as though I’ve had a part of something greater, and talk to everyone as part of a cohesive community.”

Shiff said that while some may say it’s a weakness that this is his first foray into any public position, it is also his strength, in that he has a fresh perspective and won’t just follow the crowd. He describes himself as stubborn, not easily pushed around, and a perfectionist. “I learned from my grandfather: push for what you want, but don’t run over people. You’re not in business to make friends,” Shiff said.

At the same time he says listening is the most important thing. He says he would hold informal bi-weekly meetings, perhaps in restaurants around the City, "where people could meet Council members outside of a sterile environment.”

According to Shiff, La Mesa’s perception and reputation need some improvement. “I lived outside and looked in. We need a reason for people to come to La Mesa, not just for Oktoberfest,” he said, but for things like parks, dining, and seeing it as a better place to live. He held up Julian as an example of his vision.

“Politics as usual needs to be eliminated,” Shiff said. “I want to make sure residents are proud of their Council. ‘Integrity-Family-Community’ is the tagline of my campaign,” he stated.

He is also concerned with safety, saying the city is filled with small crimes. He wants to increase police presence and pay officers more. He also wants harsher sentences for crimes against children and sex crimes. “I want people to feel safe to walk at night and go to the parks at night. We shouldn’t need fences around parks,” he said. 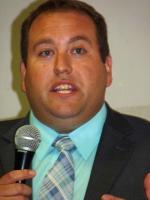 Shiff would like to bring more jobs into La Mesa. “Large, small and high tech, including manufacturing,” he elucidated. He said he would implement his plan by talking to people and experts.

He would like to increase property values but not spur too much development, he said. He does not want Mira Mesa-style industrial parks, and “I don’t just want it to be a bedroom community that works outside,” he stated.

The Budget and the Village

ECM asked each candidate about their vision for the Village and the City budget.

Shiff said the Village should have a feeling that will attract people to the spot. He was concerned about parking, and likes a system he’s seen in Sacramento that when you purchase something you are given a swipe card to use in meters to extend your parking time.

“A single source of income is a bad idea, particularly if it angers people,” Shiff said. He would look for other creative sources to fund projects, such as selling individual cobblestones.

Regarding the budget, Shiff said he would “look at long term and short term impact of each item in the budget, and consolidate certain things, saying he would need to look at it in more detail. “To make an educated decision you need to really drill down on each line item,” he said. He would also look at the City’s investments and rainy day fund. 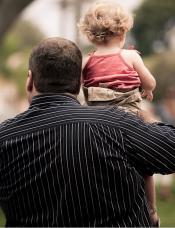 In the September 16 candidate debate put on the La Mesa Chamber of Commerce, Shiff said he supports the City paying a higher percentage of healthcare, and that he believes the City sales tax should run its course but be reexamined at some point to be sure it is still a benefit to the City.

A routine background check of court and country records, which ECM conducts on candidates for higher office, turned up nothing except standard property transactions.