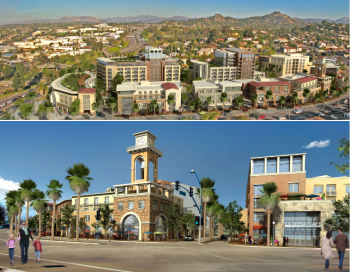 June 16, 2014 (La Mesa) -- On Wednesday, June 18 the La Mesa Planning Commission will hear a request for a proposed “Park Station Specific Plan” and “Final Environmental Impact Report,” a conceptual plan for a 5.23 acre project in the Village which could include commercial and retail space, as well as 416 residential units with an option for a 500 room hotel in lieu of the residential units.

The developer is requesting the properties be removed from the city’s Village Specific Plan and given its own proposed plan, to be called the Park Station Specific Plan.

While scaled down from the original proposal, the current iteration still proposes double the density, up to a little more than double the height limit, and to cut the residential parking by half compared to current requirements as part of the Village Specific Plan.

Table 1 from the Planning Department’s report to the Commission summarizes the differences: 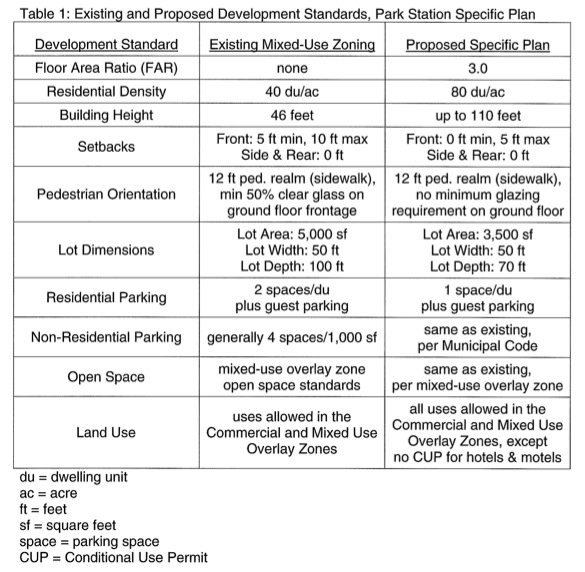 Should the project be granted status as a Transit Oriented Development (TOD), it would be eligible for double the current established density.

The developer sent out an e-mail inviting people to a free dinner before the hearing for those who want to speak on their behalf.

Although we have been unable to load it, the City's website gives this link for the Developer’s website. An opposition group has started a facebook page, No More Than Four! here.

Written comments can be delivered to City Hall, or e-mailed to bchopyk@ci.la-mesa.ca.us.