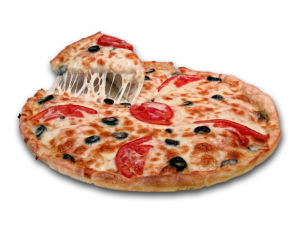 February 24, 2015 (San Diego’s East County) – Happy’s Pizza delivery person was not so happy Monday night when he was held up at gunpoint by two masked suspects.

The thieves called in a pizza order and when the delivery driver arrived at a house in the 1100 block of West Chase Avenue in El Cajon, they brandished a gun and stole his SUV, cell phone, cash and even his shoes, El Cajon Police Department reports.

The suspects handed off the stolen SUV to a woman near the 1200 block of El Cajon Boulevard.  She drove into La Mesa, where she encountered a street closure on Amaya Drive due to a hazmat incident from a big rig fuel spill.  La Mesa Police spotted the stolen vehicle and stopped the driver to question her.

Fox 5 reports there was confusion at first, since the woman driving the vehicle did not match the description of the carjackers who stole the pizza delivery vehicle.  But upon further inspection, police confirmed the license plate was a match, which was further confirmed by fresh pizza in the backseat.

The victim recovered all of his belongings, with the exception of his shoes.

The woman, Jessica Ann Garcia, 31, of El Cajon was charged with robbery and carjacking.  A second suspect remains at large; he is described as black, in his 20s or early 30s,

The woman, identified as 31-year-old Jessica Ann Garcia of El Cajon, was charged with robbery and carjacking.

The other suspect remains at large. He is described as black, in his 20s or early 30s, 5-foot-11 feet tall and weighing 180 pounds. He was wearing a dark jacket, pants and gloves.