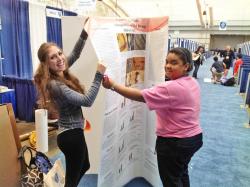 San Diego Jewish Academy junior Melissa Fagan placed first at the Intel International Science and Engineering. Intel is the largest and most prestigious high school science competition in the world.

Placing first at Intel is an enormous accomplishment. Simply being invited to Intel is an achievement as only 1,549 students were invited this year, but receiving a first place award means the recipient is in the top .000005% of science students worldwide.  Intel gives only two first place awards in each of the 17 categories it judges.  There are better odds of becoming a pro-athlete or winning an academy award than there are for placing first at Intel.

“Melissa's success at Intel is a testament to her hard work and dedication, but also speaks volumes about the quality of her teacher, Dr. Jane Willoughby, and the curriculum and faculty at SDJA,” said Dr. Jeff Davis, principal of the upper school at SDJA.

Fagan’s project, The Creation of Alginate Microparticles as a Novel Drug Delivery Vehicle, received first place in the microbiology category. She received a total of $16,000 in scholarships, which included special awards from the Office of Naval Research and Air Force Research Laboratory.

In her project, Fagan sought to reduce the toxicity of silver in medical treatments. Silver is increasingly being used as an antiseptic and disinfectant to treat chronic wounds such as burns. Antibiotic resistant infections are becoming more prevalent in hospitals, which is causing an increase in the use of silver. The challenge of using silver is that it rapidly converts into inactive silver, which causes a need for frequent re-applications. Due to the re-applications, it is used in large concentrations, where it can be toxic to humans.

Fagan embedded silver based antimicrobials into alginate particles, which is the cell wall of brown seaweed, and was able to deliver the silver particles in smaller sustained doses. This helped alleviate the problem of toxicity and has the potential to save the medical industry millions of dollars.

When asked about how she felt about her first place finish at Intel, Fagan responded, “Obviously I am still in shock, but it was really cool to be surrounded by 34 of the smartest kids in the country.”