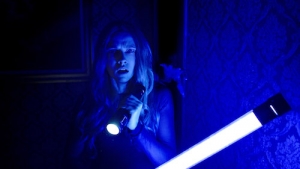 Lights Out's premise is unique and promising for a modern B-movie horror film. Rebecca (Teresa Palmer) is estranged from her mother (Maria Bello), who has a long history of depression. Her mother's current woes are only exacerbated by the gruesome murder of her new husband (Billy Burke). The culprit is a malevolent supernatural being she calls Diana, who appears only when it's dark, and who is apparently her friend. When Rebecca learns that Diana is targeting her younger brother (Gabriel Bateman), she vows to protect him.

Before I get into the movie's multiple failures, it's important to highlight the one thing it gets right. My cinematography professor once described the craft as "painting with light," a most accurate definition when applied to Marc Spicer's work here. His artificial light sources always hit their mark and are thoroughly distinguished. This is paramount in establishing the barrier between Diana and Rebecca's family and boyfriend. Spicer proves adept at using only what little light is available, especially within the unfriendly confines of Sophie's large house. Even in broad daylight, the house is almost completely dark, the only scant light source being whatever sunlight manages to pierce the closed blinds. Even though it is light enough that you can see everything clearly, that doesn't mean Diana can't appear at any time.

Which brings me to the first issue I had with Lights Out. Every single scare is predictable right down to the second. Director Sandberg and his editors fall into a rhythm that never changes. Whenever a character turns off the lights, Diana instantly appears in the background. After several more flicks of the light switch, she's still in the same place. At this point I knew she would be closer the next time. My prediction proved correct. Furthermore, I successfully called every moment when she attacked someone or screamed. After a while it turned into a little game.

When I learned one of the editors was Kirk M. Morrie, I was stunned. He did a fine job on Insidious, which didn't rely on traditional jump scares. That movie's scares were of the "when you see it" variety; the menacing figures were already in the frame, but recognizing them after a few seconds provided quite a jolt. Lights Out left most of the audience in the packed theater screaming and gasping, while I only got goose bumps and shivers. The only time I physically jumped in my seat happened when Rebecca dropped a heavy box of files on a desk to open a shot.

The premise begs for a solid execution. That it bogs itself down in less-than-dramatic exposition and clichéd dialogue is not nearly as objectionable as its treatment of mental illness. It's bad enough when the movie suggests that Diana will disappear once Sophie takes her antidepressants. As someone who has battled depression, I would have found this laughable were it not so offensive. It takes more than just pills to get through depression. I believe on some level the filmmakers knew it, too.

Which may partially explain why they crafted one of the most atrocious endings I have seen in a horror film.

How I wish I could reveal the ending. The temptation is strong, but I am not that type of critic, so I will let you experience this odious ending for yourself. I cannot, however, let this go unsaid: it is not just offensive that the filmmakers used elements of horrible events that have been plastered all over the news in recent months, and have traumatized an untold number of people across America and the world. It's also downright irresponsible and dangerous. It furthers the stigma that people with depression and mental illness endure from ignorant pundits and an uninformed public whenever there is a mass shooting or terrorist attack. It's shameful.

When the running time is so short, it's usually a bad sign. It's not surprising in this case because it was based on a short film the director made. It's difficult to expand a three-minute short into a feature-length film. I've sat through 90 minute films that felt twice as long as this one. To my shock, as detestable as Lights Out is, its 81 minutes felt like 40 minutes. Even so, the movie couldn't have ended soon enough.

Lights Out is currently playing in wide release.