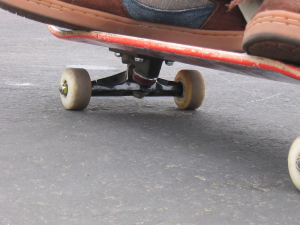 October 19, 2019 (La Mesa) – A man riding a skateboard south on Spring Street near Finley, in the right lane, was struck by a southbond Dodge Dakota pickup truck Thursday night around 9:20 p.m.

The skateboarder, 25, was ejected and rolled over the truck, landing on the pavement. He was transported to a hospital for treatment of injuries that are serious, but not considered life-threatening.

Lieutenant Brian Stoney with La Mesa Police says the truck’s driver stayed at the scene and cooperated with authorities. According to Patch.com, Lt. Stoney indicated that the skateboard may have been under the influence of alcohol.

The accident forced shut-down of Spring Street during the investigation.