March 3, 2011 (La Mesa) – While we have many fine family restaurants in East County, it’s an event of great anticipation when a new restaurant opens of a little fancier variety, and so it was when a friend and I went to try the new Vine Cottage in La Mesa for lunch. We came away with a mixed feeling of, if not complete delight, at least strong promise.

On the plus side, Vine Cottage has brought new life and style to the location, with a beautifully renovated décor that mixes modern amenities with skillfully faux-aged walls and nods to the classics to create an inviting European-style ambiance. The music was enjoyable while still being able to carry on a conversation with your companions, and the service proved timely and attentive. 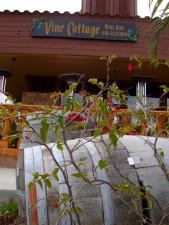 The menu offers something for all tastes, listing upscale comforts such as Mac and Cheese with smoked Gouda, Pancetta and Truffle Oil, alongside sophisticate creations such as Pine Nut crusted Wahoo topped with crispy leeks in a white wine reduction and chive oil. There was nice a selection of pastas and salads, as well as a selection of thin crust pizzas ranging from the tradition Margarita to an exotic Shrimp Zinfandel.

We started with two appetizers. The Butternut squash sautéed ravioli with fennel cream and truffle oil was so delightfully decadent that one could easily content oneself with this and a small salad. The other, Mac and Cheese Croquettes, was bland for our tastes, served with an Alfredo sauce and cold Marinara.

We savored an unusual and fruity Minassium Young Zinfandel recommended by our server, though it was a pricey $14 a glass. (Fortunately for wine connoisseurs, the restaurant offers many wines and beers on happy hour specials nearly all day – starting at 11 a.m.)

As pork can easily be overcooked and dry, we decided to share pork chops with apple-rosemary demi-glaze to test the chef’s skills. Far from being dry, the center of the pork was succulent but perhaps a tad too translucent; the sauce, however, was remarkable. We were impressed with the accompanying sautéed artichokes and the gentle zing of spicy warmth that lifted the side scalloped potatoes above ordinary.

For dessert, I ordered a Ricotta Cheese Cake on orange short bread crust “drizzled with white chocolate glaze” that sounded delicious, but was so solidly frozen that we could barely dent the surface with a spoon. I did take it home to try when defrosted; the thick glaze amounted to half of the dessert and overwhelmed any hint of orange flavor white chocolate. The server offered to replace it with another dessert of our choice, but my friend’s Macadamia Nut Berry Cobbler was so amazing that I was lucky she offered to share. We both highly recommend it. 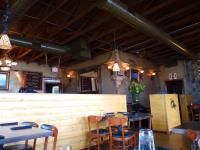 The restaurant has been open for a good month, however they had no coffee as we were told their coffee machine had not yet arrived. “No problem,” said my friend, “we’ll have tea.” Alas, that was not available either. We hope this glitch will be remedied soon, as this is a place where one would love to linger over a freshly-brewed cup of java or some exotic tea.

Thankfully, the high points were so high as to outweigh the rough spots. We look forward to going back and exploring more options on an intriguing menu, and give a new kitchen the chance to do some fine tuning.

Vine Cottage is located at 6062 Lake Murray Blvd, La Mesa; for reservations call 465-0138. A full menu can be downloaded from their website here.

Good to know great restaurants and trying it out. For the others to know about it.

This collection is awesome! absolutely love it! My Blog : mind power | diets that work