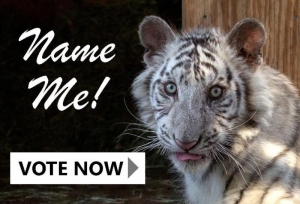 January 20, 2018 (Alpine) – Lions, Tigers in Bears in Alpine is having a contest to name its newest resident:  a recently rescued white tiger cub.

Here are the choices:

NOLA: Short for New Orleans, Louisiana, where she was rescued from.

MISSY: By chance, two of the women in Louisiana who were key in helping to rescue the cub are named Missy. We propose this name in their honor.

ZOE: In honor of a longtime, dedicated supporter of LTB who works tirelessly on behalf of captive big cats and exotic animals.

CHARLIE: Suggested by LTB supporter Sundi, who won last year's auction package at Wild in the Country to join Bobbi on this life-saving rescue.

SASSY: LTB volunteers use this word quite a bit to describe her playful, spunky nature!

Simply make a donation of any amount to LTB and tell us your favorite name. Each vote equals $1, so if you make a $25 donation, that's 25 votes!

Watch for updates on Facebook and upcoming e-newsletters to see which names are in the lead. Donate as often as you like, and as much as you like. The winning name will be announced on Valentine's Day, February 14th.

Donations for votes must be received by Tuesday, February 13th at midnight. Votes will be applied based on all donations received by voting participants between January 11th and February 13th. Memberships, visits, or other purchases do not apply.