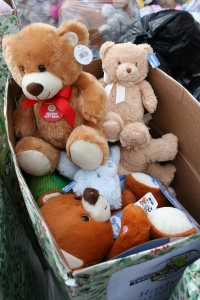 Anyone who brings a new, huggable teddy bear (with tags attached) to a Chick-fil-A restaurant in San Diego County between 5 and 7 p.m. on Tuesday, Oct. 3, will receive their choice of a free Chick-fil-A Chicken Sandwich Meal or four-piece Chick-fil-A Nuggets Kid’s Meal. Limit of one free meal per customer. Some Chick-fil-A restaurants also will feature a crime prevention display, as well as police vehicles and equipment at the Teddy Bear Drive Family Night. 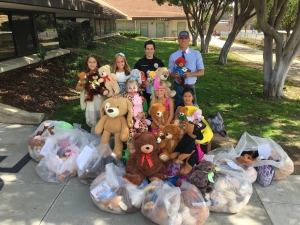 Since it began in 1990, the San Diego Regional Law Enforcement Teddy Bear Drive has grown to involve 23 law enforcement agencies that collect upwards of 50,000 bears annually. This year, the City of Oceanside Police Department and San Diego County District Attorney’s Office are organizers of the annual effort which runs through Dec. 5, when teddy bears will be delivered to Rady Children’s Hospital.

On Dec. 5, law enforcement officers in police vehicles will arrive at Rady Children’s to a crowd of cheering patients, parents and staff along the driveway in front of the Rose Pavilion. After a brief ceremony, the officers will separate into groups, visiting patients in various departments in the hospital, offering a teddy bear to every patient.

“We are very proud to be a 2017 co-sponsor of such a worthwhile event, and we would like to thank Chick-fil-A for their continued and generous support,” said Carlsbad Police Dept. Lt. Christine Calderwood.

“The stuffed teddy bear donations go a long way to support and give comfort to some really great children receiving care at the hospital,” said Kyle Steck, franchise operator, Chick-fil-A in Santee. “One of Chick-fil-A’s goals is to promote community connections and enrich the lives of everyone we come in contact with. Each child will treasure this special visit and the comfort of their new teddy bear, creating memories to last a lifetime.”