March 22, 2020 (San Diego) – With people around the world sequestered at home due to the COVID-19 virus, factories shut down and freeway traffic jams virtually gone, satellite images and photos are revealing sharp drops in pollution across the globe.

Similar drops are being noted in other cities shut down due to the coronavirus including New York City, Seattle, and San Francisco. 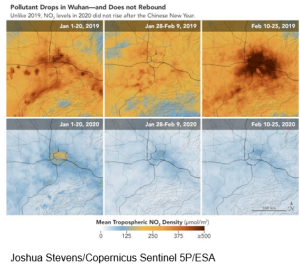 In China, the first place struck by the new coronavirus, satellite data from the ESA satellite showed the largest-ever drop in nitrogen dioxide emissions from January 1 to February 25.  Though rates have dipped in the past during the Olympics when some factories were shut to drop pollution and during Chinese  New Year celebrations, Fei Liu, air quality research with NASA, says, “This year, the reduction rate is more significant than in past years and it has lasted longer.”

The shutdown in human activity causing pollution may also be helping reduce water pollution. In Venice, where canal boats have not been running, tourism has come to a halt and some pollution sources are shut down, photos on social media show dramatically cleaner looking waters.

But pictures on social media claiming swans and dolphins have returned to Venice are alas, hoaxes.  According to National Geographic, the swans in the photos are regularly seen in canals of Burano, a small island in the Venice metropolitan area, while the “Venetian” dolphins were actually filmed at a port in Sardinia in the Mediterranean Sea, hundreds of miles away. 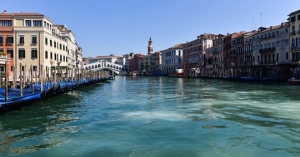 While the impacts of the temporary shutdown are not expected to produce long-lasting environmental improvements, the global slowdown-induced rapid improvement in air quality and perhaps water quality give a glimpse into what is possible--if mankind were to make serious efforts to cut carbon emissions in an effort to reverse climate change and clean up our planet.

As one poster observed,  “Nature just hit the reset button.”