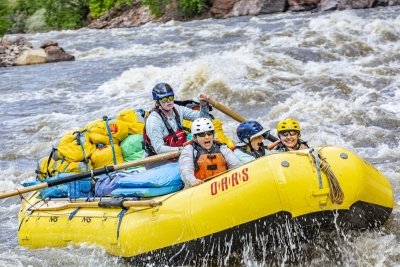 Cover photo:  Cortney guiding a raft through the Warm Springs Rapid on the Yampa River in Dinosaur National Monument on the Colorado/Utah border.  By Mike McCoy

The 24-year-old Rancho San Diego native works as a whitewater river guide - mostly on the Colorado/Utah border - during summers and as ski instructor during the winters in Idaho.

On the Green and Yampa rivers, which both flow through Dinosaur National Monument, she’s responsible for piloting rafts through sometimes perilous class III and IV rapids, leading guests on nature hikes, helping create meals - which includes making a mean upside down pineapple cake - for 20-plus people plus myriad other duties. At the Brundage Ski Resort near McCall, Idaho, she's teaching youngsters and adults the basics of the sport.

I met her this past July on the Yampa, which is the only remaining free-flowing (undammed) tributary of the Colorado River. She was working for the Angels Camp-based OARS rafting company, the only woman in a group of four guides. She clearly was having a wonderful time.

“My decision to choose this life, especially as an OARS raft guide, has turned out even better than I’d hoped,” she said.  “Every year I learn more about how to run a raft, how to do swift-water rescues and make sure guests are having fun.  I also love being able to share the natural and human history of the rivers. And my fellow guides are great, too. This past summer, I got to run the Main Salmon River in Idaho.”

Bayuk never planned to become a raft guide or ski instructor. When she entered college at the University of Utah in Salt Lake City, she thought she wanted to be a nurse. But after her first few classes, she knew that wasn’t a good fit. 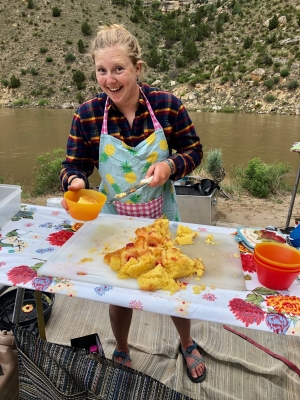 Bayuk was also involved in an outdoor education program, which appealed to her immensely. When she went on a multi-day rafting trip down Green River through Dinosaur National Monument before school started her freshman year, something clicked.

“Between the friendly guides and just the whole experience, I knew that was something I wanted to do more,” said Bayuk, who skied at the Snowbird Ski Resort outside Salt Lake City during her college winters and was a wrangler leading horseback trips near Park City during the summer.

As much as the guiding life intrigued her, she was conflicted as she approached graduation. She recalled, “But when I talked to one of my mentors at the university, he said: `What will you remember most about your lief when you’re 80,  having adventures as a raft guide or sitting behind a desk?’”

The answer, she said, was obvious. She chose - at least for the time being - the outdoor life.

Still, when she told her parents what she wanted to do, they were at first puzzled and asked her, “You went to college for four years to go be a river guide?” Since then, though, they’ve been on whitewater trips with her and support her choice, she stated.

Bayuk got her start by taking a guiding course offered by OARS on the Green River the summer after she graduated in 2107. She been based in Vernal, Utah, during the summers since then, running rivers through Dinosaur National Monument. With its headwaters near Steamboat, Colorado, the Yampa enters the monument from the east, while the Green originates to the north.

“What I really like about the Yampa River is that it varies between being squeezed between soaring canyon walls and then flowing into wide open spots,” she said. “Because it’s not dammed, it can have major flows in the spring before it tapers off during the summer.”

The big rapid on the Yampa is called Warm Springs, which Bayuk ran like a pro this past summer. It was at high water, so she had to make some precise moves to miss the nasty, potentially raft-flipped hole at the bottom of the raft.

She’s equally fond of the Green River, in part because of its history.  One-armed Civil War Major John Wesley Powell first rafted the Green in wooden boats in 1869 with a crew of explorers as part of his expedition down the Colorado River. Sixty years later, Bus Hatch was the first outfitter to offer trips down the Green when he launched “Green River Expeditions” in 1929.

“I love both rivers, but the Green has a different feeling because it’s narrower,” she said. “The rocks are also a lot darker, which creates another kind of  ambiance as you float through."

Besides the excitement of sometimes raging rapids and the beauty of deep canyons and star-filled nights, Bayuk said nearly all those who come on river trips are outgoing and fun to be around.

“We get everyone from return guests who want to try out a new river to complete novices who have never been camping,” she noted. “Perhaps one of our trips just spoke to them and they are out there with a spouse or their families. But a guided trip is a nice introduction because someone else is doing the cooking for you. And there’s a support system if you are uncomfortable about anything.”

Bayuk said there are few women guiding for Oars on the Yampa or Green rivers, but that has never posed a problem for her.

“The guys I’ve met and worked with here have been super supportive of women working as raft guides, so I love working with them,” she said. “Besides, I’ve always had more male friends than women friends, so that ratio no big deal. They just treat me like one of the fellas and they certainly don’t expect me to cook because I’m a woman. “In fact, most of them are feminists,” she added. “They respect that I can do my job well. I’m strong, so I can lift something by myself, or another guide can do it by himself. Or we can lift together and get things done faster. It’s kind of like a big family out on the river.”

Bayuk said she’s not certain how long she’ll continue guiding in the summers and teaching skiing when the snow falls.

“I guess until I don’t enjoy anymore,” she mused. “Right not, though, I’m excited when I wake up in the morning because I get to go skiing or rafting. When I don’t feel that, I’ll start thinking about something else.”

That probably means going back to college for a master’s degree in education, perhaps as a counselor and working with kids who are struggling.

“Who knows, maybe getting them into the outdoors could do good things for them,” she concluded. “I think that’s something that our schools are missing now and could really help young people find their way. I know it’s been great for me.”