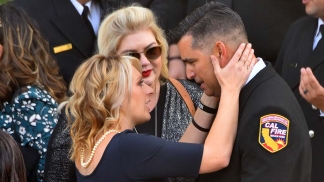 December 24, 2017 (San Diego) - Ashley Iverson slowly inhaled. Then she let out a long breath in front of 1,800 mourners with their hearts in their throats.

“Just breathe is what I told one of my best friends when she lost her soulmate at the age of 22,” Iverson said at Saturday’s private memorial service for her firefighter husband Cory at The Rock Church in Liberty Station.

“Will you join me in taking a breath?”

Speaking of her “utter disbelief” at that moment, the widow of the Cal Fire apparatus engineer killed Dec. 14 in the Thomas fire said her husband “left us as a superhero.”

But she took special pains to comfort members of the strike team who worked with the Escondido native to save the threatened town of Fillmore.

“I may be a wife that lost her sweet husband, and a mother of children that belong to that handsome man. But what I am not — and none of us are — are those men that were with him that day,” she said. “My heart is obliterated for you.”

She said nobody could come close to fathoming their grief.

“But if you can please hear me — you were there for a reason. You were there because the lord knows that you can withstand the horror. Today I am asking you to have the strength and courage Cory has and continue to breathe each and every day and remember: You are loved. You are good enough. You will survive and use this nightmare to help others.”

Trying to explain the tragedy was a struggle for speakers at his two-hour memorial service, including Chief Tony Mecham, head of Cal Fire’s San Diego unit.

Also addressing members of the strike team, Mecham said: “You are filled with grief and sadness and mourning and trying to understand what happened. I think the harsh reality is: We may never have the answers to all of those questions. But we must begin to heal and move forward. … We cannot allow this tragedy to define us as an organization.”

He said the San Diego unit would “come out of this stronger. And I make this vow to you: We will find a proper way to honor Cory.”

Recalling what colleagues had said: “If you were going to clone a firefighter, you would clone Cory Iverson,” who died of burns and smoke inhalation at age 32. An urn with Iverson’s cremains was at the service.

Mecham — who spoke more than a half-hour in a ceremony live-streamed by the church — hailed Ashley for her poise three days after hearing of her husband’s loss. She wanted to speak to firefighters at the Ventura County fire camp.

“I was a little worried about putting a grieving widow up before a couple thousand firefighters,” he said. “When she read me what she wrote, I had no doubt. To think that somebody has the humility less than 72 hours after losing her husband to stand before thousands of firefighters in Ventura and let them know that she’s OK, and she was praying for their safe return, is a sight I don’t think I’ll ever see again in my life.”

Mecham spoke directly to Ashley: “I will recommit to you the same thing I told you on that dock that fateful morning: We, all of us in the room, will stand by you. We will hold your hand, and we will guide you through this. You’re stuck with us.”

Another poignant story was told by Cory’s uncle Steve, a Cal Fire veteran who encouraged his nephew to make fire service a career.

Steve recalled the one fire he worked with Cory — in Anza — and how he heard Cory’s chainsaw as his own inmate crew came close to a “tie-in” with Cory’s team. But darkness fell, and their connection didn’t come.

“Cory’s passion, determination and capacity to love were unmatched,” Luke said. “He had such a huge heart. Cory strived for perfection in everything that he did.”

He said God wasn’t afraid of mourner emotions or questions, but as “Cory might say: I know that God’s up there saying: I gotchyou. I gotchyou.”

And Cory’s young cousin Austin, preparing for a firefighter career as he pursues training at the Palomar College Fire Academy, provided a lighter touch.

To the later relief of Rock Church head pastor Miles McPherson, Austin explained he was wearing a Vons name tag. (He hadn’t just come from work — it was Cory’s from a former employer.)

“I don’t know why, but when he quit from Vons I wanted his name tag,” he said, noting the black bar across it in Cory’s memory.

He also recalled Cory never being a good texter.

Austin said one text contained “gibberish.” But cousin Cory promised he would explain it the next time he saw him.

“And I’m going to keep him to that,” Austin said. “The next time I see him, he’s going to explain to me what has happened. Or what he was talking about. Because I still have no idea.”

Chief Mecham said Cal Fire stations throughout San Diego County were being covered by other fire departments so Iverson’s comrades could take part in his service. An GoFundMe account has been established to help Iverson’s family with funeral costs and other expenses.

“Let there be no doubt to anybody in this room that Cory Iverson died a hero,” Mecham said. “Cory Iverson lost his life for one very simple reason: He put others first.”

“Never in a million years could I have ever imagined the [outpouring] of support,” she said. “It is something I never before felt worthy of and will simply never be able to repay.

She spoke to Cory at the end:

“Today I will add one more vow to you, my love. I vow to … make you proud. I am no longer a slave to fear. I am a child of God. I will see you soon, my sweet husband, my love.”