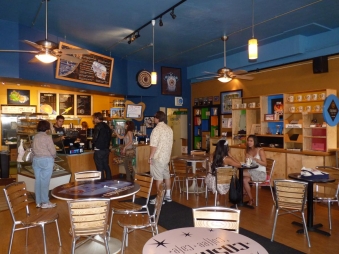 September 22, 2015 (La Mesa)—Cosmos Coffee, a popular gathering spot in La Mesa’s downtown village, has closed its doors—for now. But the owner is hopeful that employees may want to takeover ownership and reopen.

The shop posted on its Facebook page on August 31, “It has been a pleasure to serve and be part of the community of LA Mesa for the last six years. Cosmos is closed temporarily. We will be updating the website and Facebook as soon as we know what is happening. We want to thank all of our loyal customers and we hope we will be back to make you all feel special and caffeinated as soon as possible. The Cosmos Crew.”

La Mesa Today reports that the owner, Ari Bejar, blames the business slowdown on the downtown reconstruction project that has left downtown torn up for the past year.  “The construction project just killed us,” he said.  The store also lost a massive tree that the city cut down due to roots damage sidewalks, a sewer line and the foundation, leaving no shade for outdoor patrons.

The City originally offered to expedite renovation to complete it in a few weeks, but merchants opted for a protracted construction period that would close only limited portions of the street downtown village at any one time. New shade trees are planned as part of the beautification project--but not in time for Cosmos.

The coffee shop served up more than espresso brews, functioning as a gathering place for the community with entertainment that included live music, comedy and open mike nights through the years.

Ben While wrote, “My childhood is leaving! Jennifer Deena Mr. D's left, Sanfilippos is leaving, and now Cosmos???” a reference to several other local businesses that recently closed down.

Annamarie Tirsbier posted that even more than the food and coffee drinks, she will miss the community at Cosmos. “Cosmos has wonderful and friendly staff who take pride in their jobs and always have a smile on their faces. I will miss bumping into friends and family on the weekends and seeing the regulars come in for their coffee and a chat. A sense of community is a rare thing to find and my hope is that La Mesa gets one of their gems back!”

On La Mesa Today,  readers reflected on the shop’s closure in the comments section- and at least one welcomed news of Cosmos' demise.

Joe Miller blamed the closure on new ownerships that he faulted for “poor service and food quality” adding “Cosmos became a magnet for unemployed losers from halfway houses to spend the day sitting/sleeping on the couches and chairs…we should be thankful that it’s gone.”

Kelli DeMent wrote that she first met her husband at Cosmos, which will “always have a special place in my heart” as their regular hangout, despite some changes she feels were for the worse in recent years.  Still the long-time Cosmos aficionado concludes, “I’m hopeful someone will see the potential in this cool little coffee shop and bring it back to the place it was in its `heyday.’”