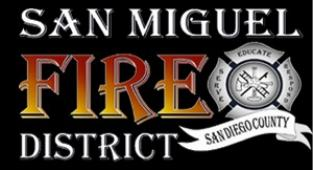 March 1, 2016 (El Cajon) – A new fire station on Pepper Drive in El Cajon will cost up to $1.8 million to build, including the land acquisition cost. The San Miguel Fire District approved the expenditure last week of $1.4 million for construction costs – more than double the original cost projection.

The San Miguel District has faced financial troubles in recent years, turning over firefighting services to Cal Fire in 2012.   The District’s board approved the most expensive of three options for the new station, which will be located only about a mile from another new station set to be open in a month in Lakeside.

The second station will be run by the Lakeside Fire Protection District, the San Diego Union-Tribune reports.

The San Miguel District has said its new station is needed to meet firefighting demands in the rural community known as County Service Area 115, an unincorporated area that’s less than a square mile.

It’s been the center of a jurisdictional squabble, with San Miguel once trying to annex the area. That plan has been abandoned and instead, the County is now proposing to have four fire agencies divide up the responsibilities of serving the small area and divide up revenues based on the number of call responses. Those agencies include Lakeside, Santee, El Cajon and San Miguel. San Miguel would get just 20% of the $350,000 in revenues under the current plan.  Not all agencies have signed on, however, and the plan could yet be changed.

The new station San Miguel is building will house one fire engine and three firefighters.

The board was split on its decision to approve the increased funding, with the action narrowly passing in a 4 to 3 vote. The Union-Tribune reports that Director Theresa McKenna criticized the prior board for a lack of due diligence including not funding an adequate septic system. Other increased costs include access for the disabled and changes to meet earthquake safety and stormwater management needs, as well as lighting changes.

So, four San Miguel board members voted to spend millions of their citizens tax dollars to build a fire station outside the boundaries of their district (in Lakeside), on a questionable lot, to better serve a county area (CSA-115) for which they have no responsibility! It would appear they have forgotten who they represent. The fact is that the residents of Bostonia (and Crest) pay the highest fire service fees in the county, including two separate benefit fees and a parcel tax. This in addition to the share of the property tax the district also collects. Perhaps they should find a location for their new fire station in the district that is actually paying (dearly) for the service!