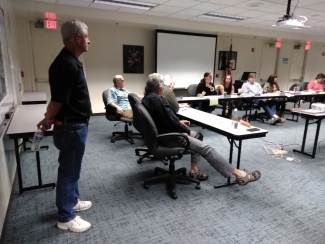 December 3, 2019 (San Diego’s East County) -- Valle de Oro Community Planning Group will have a second public meeting tonight to receive community input about the proposal to turn Cottonwood Golf Course into a sand mine for the next decade. The golf course is located on Willow Glen Drive in a residential area in the Rancho San Diego area of El Cajon and on federally protected land that’s part of the South County Multiple Species Conservation program.

Within a mile from the proposed sand mine there are at least half a dozen schools, several care centers, a senior care facility and numerous residential communities. The main concerns about this sand mine are focusing on the pollution that could cause health issues for the students who attend the nearby schools and also for the local residents, the already congested traffic that creates dangerous situations, the well water level and water quality and also the environmental impact on the area, among others.

Michael Schlesinger of New West Investment Group, Inc. purchased the golf course in 2015 after it went bankrupt. Schlesinger has a history of purchasing golf courses that are not financially viable anymore and turning them into lucrative sand mines.

Schlesinger applied for a Major Use Permit (MUP) to sand mine 244 acres out of 280 acres of land back in 2017 and the application along with the EIR are currently under review with San Diego County, which closed the public comment window on November 22. Jon Cloud of Environmine stated in a previous interview that “The owner at the Cottonwood wants to hold on 50 acres for future development and donate the rest for open preserve” at the end of the 12 years of sand mining and reclamation plan for the land.

According to Valle De Oro planning group chairperson Tinsley Becker, the group already had a meeting with the applicant on the project for an initial debriefing.

The applicant is expected to attend the planning group meeting tonight and was present during the last group meeting in November, when Environmine consultant Dennis Franzway gave a presentation and attempted to clarify numerous issues raised by the local residents. This meeting came a day after a scooping meeting with the County on the 4th attended by approximately 200 people. Tonight would be the third public meeting in less than a month on this subject, which makes for a very busy end of the year for the people interested in the Cottonwood sand mining project.

In an interview recorded after the scooping meeting last month, Becker declared, “We will learn more and have the opportunity to hear from the applicant. We are still waiting for all the analysis, but I can tell you that the initial perception was not favorable.” Becker said she grew up in El Cajon, went to Valhalla High School and now lives on Mt. Helix, which is close to the proposed sand mining site. Therefore, she said, “For the people who live in the immediate vicinity is a major quality of life concern on every level – both the tangible environmental impacts that can be measured through technical regulatory process, as well as intangible things that are not measurable in the Environmental Impact Report.”

During the planning group meeting with the applicant and the community last month, Becker had a long list of questions for Franzway, responsible for the technical consultancy with the Environmine, a company specialized in completing Environmental Impact Reports for sand mines nationwide.

The same company is on the sand mining application for two other controversial projects in East County, both located in Lakeside: one in Moreno Valley and the other in El Monte Valley. During his presentation, Franzway used the sand mine on Moreno to argue in favor of the Cottonwood sand mine as a vital source of local sand for the constructions projects in East County.

Asked if there is any public benefit to this sand mine, Franzway managed to answer despite the general laughter that ensued after the question:  “I think they would source the concrete within the county. There’s only one small sand mine permitted in the county and that’s a small one in Lakeside.” 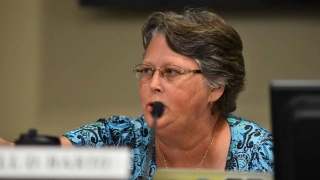 A passionate intervention came from Jill Barto, who is a Governing Board Member at Cajon Valley Union School District (photo, right, at CVUSD; by Ken Stone). Barto asked Franzway, “How many kids need to be killed, how many people need to be killed on these roads by this additional traffic or killed in our community by this project? How many would it take, one, two? I don’t know. And who do we sue, ‘cause it’s probably going to happen – somebody is going to get very, very sick.” Barto said, “We have kids in these schools that are fragile, we have seniors in the community, adults with health issues,” before asking Franzway: “Are you going to have a legal contingency fund set up for all the community members, all the kids, all the parents, all the staff members that have asthma attacks, that get lung disease?”  She declared, “Kids are our number one priority. How do I file a report if my kid ends up with lung disease?”

Franzway said there is no contingency fund set up and that the people could raise their concerns with the county. Becker asked him if the applicant he represents opened “meaningful channels of communications” with the school districts and the school themselves, with all the HOAs in the area and senior center facilities. Franzway answered that the county required them to send out letters and it was done. Becker then insisted the new owner goes and talks directly with the schools and people in the community.

Another concern was that the company does not plan to bring in fillings to cover the sand pits after extraction and claims the land could be leveled with the existent material on the site. A local resident said, “I live in the river bottom; there is no rocks, there is no clay, it’s all sand.”

The same resident asked if the applicant intends “to reopen the cement plant and cause more traffic, “ while referring to the presence of Jon Cloud on the project. Cloud is a contractor and a consultant with a construction business, now working for the Environmine to complete EIRs for sand mines.

Franzway addressed the concerns about the dust in the air during strong winds during the Santa Ana season and said the mine will be shut down, while the aggregates will be maintained moist during extraction and transportation using a conveyer belt on the site.

In an interview prior to the planning group meeting, local activist and community organizer Barry Jantz said, “Our next step is to continue to organize the community and at one point, we will raise a dollar to fight this if that needed to be.”“

Jantz does not exclude legal action, but he hopes it would not get that far. He said, “The real hope is that we can go through this legislative process and get it opposed. And we will be prepared for anything, but at this point we are not talking about were the board of supervisor will approve it because our goal and what we believe we are gonna be successful at is getting the board of supervisors to oppose it, if it even gets that far.“

The planning group has an advisory role and will vote on this project at the County request who will vote through the county planning commissioners and then the board of supervisors if appealed.