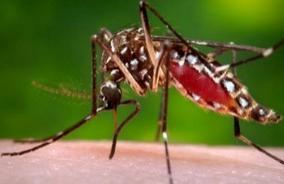 February 17, 2016 (San Diego) —  Zika virus has been the main culprit suspected in thousands of cases of babies in Brazil born with microcephaly, a condition that causes small skulls and under-developed brains.  But now a group of doctors and researchers in Argentina have published a report suggesting another possible cause: the chemical Pyriproxyfen, a larvicide made by a Monsanto subsidiary that has been applied to drinking water supplies in Brazil to control mosquitoes.

Doctors at the University Network of Environment and Health note that while Zika has been around for a long time, the birth defects are new.  Zika previously never was associated with birth defects, even in areas where 75% of the population contracted Zika.  Pyriproxyfen is relatively new in Brazil, applied in response to the growing number of mosquito-born illnesses such as Dengue Fever and Zika.

The physicians suggest that instead of larvicides, cleaning up standing water and releasing mosquito-eating fish may be better, safer alternatives. At least one state in Brazil has suspended use of Pyriproxyfen due to the doctor’s report.

East County Magazine contacted Helix Water District to ask whether Pyriproxyfen or other larvicides are applied to drinking water locally. Mark Umphres responded that larvicides are not used here, adding, “the chloramine residual we maintain would inhibit insect and microorganism growth.” Chloramine has been used in the Helix district at low levels since the 1980s with no reported ill effects, he added.

Some prominent experts are not persuaded of a larvicide-microcephaly link.  Scott Weaver, head of the Institute for Human Infections and Immunity at the University of Texas, noted at a workshop on Zika hosted by the National Academy of Sciences earlier this week, “I think there’s very limited application of larvicide, especially in the poor communities in Brazil where al ot of these cases are occurring.”

The Washington Post reports that Albert Ko, who chairs Yale School of Public Health’s department of epidemiology and microbial diseases, notes that larvicide in Brazil has been applied mostly to rural areas, not populous urban cities where Zika started in Brazil.

Yet another theory making the rounds on the internet, based on a single blog post, suggests that genetically modified mosquitoes released in Brazil could be responsible for the birth defects there, noting that Zika outbreaks have occurred in many countries but thus far, the microcephaly cases have been nearly entirely limited to Brazil or travelers who went to Brazil. Thus far no credible experts have stepped forward to support this theory.

Only a small number of the women who gave birth to microcephalic infants tested positive for Zika, however Zika can only be measured in the bloodstream for about a month, and many of the women did report having Zika-like symptoms such as rash, fever and red eyes earlier in their pregnancies.

A major study is underway in Colombia on several thousand pregnant women who contracted Zika to try and find answers to whether Zika (which has been measured in amniotic fluid) is causing the brain damaged babies and if so, can it be transmitted during all stages of pregnancy or not.

Expectant mothers with Zika virus in South and Central America face tough choices.   Microcephaly doesn’t show up on ultrasounds until fairly late during a pregnancy, when abortion is illegal in much of Latin America.

Researchers are also studying a possible link between Zika and Guillain-Barre syndrome, which has been found in a growing number of Zika patients in multiple places including adults.

Thus far, 50 cases of Zika have been diagnosed in the United States but all of those cases were contracted outside of the US., with the exception of Puerto Rico, where Zika has been transmitted, and one case in Texas where a traveler’s  partner got Zika through sexual contract.

The World Health Organization has declared a global emergency to combat Zika virus and work toward development of a vaccine, but that’s still likely several years away.

The U.S. Centers for Disease Control and Prevention earlier this month issued their highest level of alert over the prospect of Zika gaining a toehold in the U.S.  President Barack Obama has asked for extra funding to combat Zika.

In the U.S., Zika isn’t considered likely to become a major epidemic since cold winters in most of North America would kill the Aedes mosquitoes that carry the disease. Aedes mosquitoes have recently been found in San Diego County, so residents are asked to clean up standing water that could provide breeding grounds for the tiny pests.

Makes sense even if we're not yet sure if it causes the microcephaly. There has also been a huge spike in cases of Guillain-Barre, which causes paralysis, and that's coincided with the Zika outbreak in several countries, not just Brazil.  Also we're now seeing a couple of cases of Zika sexually transmitted. So it's wise to have money spent on things like screening blood supplies, screening exposed travelers, publicizing symptoms, etc.

The Aedes mosquito, which carries Zika, is the same mosquito that also carries Dengue Fever, chikungunya, and Yellow Fever, all potentially serious diseases.  So controlling its spread in the few areas it's been found is wise, though I'm not sure spraying insecticides everywhere should be the first approach. Encouraging people to clean up standing water is good and so is making mosquito fish available - one town in South or Central America eliminated Zika this way.  By the wayyou can get FREE mosquito fish from the County of SD if you have a pond or other water source on your property.

That said I think all options should be explored including chemicals that may be causing or contributing to the high number of birth defects, which are alarming.

While there are many problems Monsanto has caused, this probably isn't one of them.  There are a lot of facts coming out that would seem to debunk the theory that a larvicide made by Monsanto could be the cause of the Zika microcephaly, which has in fact occurred in places where no larvicide was sprayed: