“The only thing to fear is fear itself.” – Joe Reilly, quoting Franklin Delano Roosevelt

July 15, 2014 (San Diego)-- Joe Reilly, World War II veteran of the 101 Airborne Division, jumped onto Normandy on June 6, 1944 and fought at Bastogne. On July 14, he told the San Diego City Council that “fear is in close proximity to courage. In combat you make a choice. If fear overcomes courage, you will be defeated in combat. Our workers deserve courage from our leaders.” 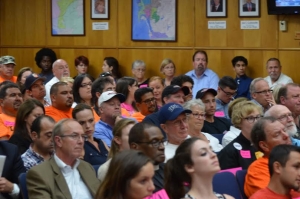 Today the council made a choice that supporters view as a profile in courage, voting to help low-wage workers and raise San Diego’s minimum wage by enacting a city ordinance, instead of placing the measure on the ballot. Opponents in the business community, however, objected to the action and voiced concerns over economic impacts.

This historic proposal will also give workers five days of earned sick leave. This issue is critical since it deals with a common problem where workers have to choose to go to work sick, risking the health of others, or staying home and not making the rent. 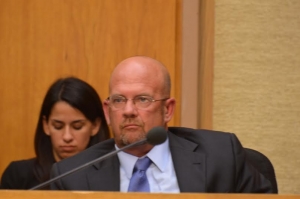 Opposition came from the business community, which raised the alarm that they would have to raise their prices, lay off workers or worse, close their doors or move away from San Diego. Among them was Channelle Hawken, of the regional Chamber of Commerce who said that this would place the city at a competitive disadvantage. She said that 14% of her members were talking about leaving the city.

Supporters pointed to the reams of data that tell us that raising the minimum wage helps people have a slightly better quality of life. There is also the fact that they will spend the money at home.

Richard Barrera of the Central Labor Council pointed out that 172,000 people “will get a raise.”

Allan Gin, an economics professor at the University of San Diego did point out that the minimum wage reached its hi point in buying capacity in 1968. It has been steadily eroding, and the plan to index the wage means that he will not have to come back when the next council needs to raise it again. That got some laughter from both the council and the Audience.

When the time came for the vote, Council Members Mark Kersey, Scott Sherman and Lori Zapf raised the issue of how this will affect business. They all were in agreement with the business interests that voiced concerns regarding making payroll and the bottom line.

There was also a request by a few in the business community for a two-tiered pay system, but this time Council Member Sherri Lightner pointed out that this violated California Labor Law. At the last Council meeting, Council President Todd Gloria also addressed this exact point.

Kersey was particularly sensitive about the fact that some of his constituents have business in neighboring cities and none of them is making any moves to raise the minimum wage, which will place his constituents at a competitive disadvantage.

Sherman was clear in telling the audience that the government should not be helping them, and that they could succeed if they had the drive.

The most touching moment of the night came when Councilmember Ed Harris used his three minutes to get off the dais and thank Paratrooper Reilly for his service to his country, both in World War II and right now.

President Gloria pointed out his own well-known story. Be is the son of a hotel maid and a gardener. His story is not possible today, he emphasized, stating, “The world has changed.” We need to change and we need to rebuild the middle class.”

The vote, predictably, was along party lines, with Sherman, Kersey and Zapf voted against it. There are enough votes to override a mayoral veto, should Mayor Kevin Faulconer veto the measure.