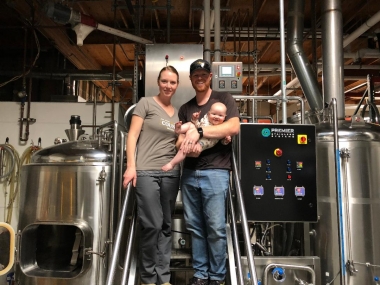 Last month, Council Brewing Co., based in Kearny Mesa, found what it considers a perfect place to expand. It purchased the equipment and assumed the lease of Finest Made Ales at 9962 Prospect Ave.

Head brewer Liz Chism, who runs the business with husband Curtis, said they had been looking to expand their operation for about a year and a half, and the existing brewery checked all the boxes on their wish list.

“It was what we needed to do, and it was a turn key, ready to brew place,” Chism said.

Brewing professionally for four years since the inception of Council in 2014, but for seven total counting her hobby brewing years, Chism has won several prestigious industry awards, and built a fair-sized business, yet with the expansion the business will more than double its current production.

The Santee site is also going to provide the right size for what Chism says is one of the main reasons for starting the business--to bring people together.

The 4,000- square foot facility has a sufficient amount for a tasting room, as well as plenty of space for making high quality beers. The deal included the purchase of five 30-barrel tanks, two 15-barrel tanks, and two seven-barrel tanks, including one that’s automated.

“Another huge benefit from the deal was a canning line,” Chism said. “Our customers have been asking for cans for a long time.”

Finding and making a winning bid on the Santee brewery took only 18 hours, Chism said. They saw an ad in a trade magazine for the auction on a Friday, inspected it the same day, made a bid, and by the following afternoon, the Chisms were in charge.

Timing has been obviously been good for Council. The Chisms were initially looking for investors and financial aid to open their business in 2014 but when things bogged down, they decided to sell their Santee home to raise the needed capital. Chism declined to say what that figure was.

Council specializes in IPAs (India Pale Ales) and sours, but it also makes a variety of ales that include a red ale, an American brown ale, a porter and a blonde. Its regular menu also features several English, Belgian, and German style ales, and barrel aged saisons that command higher prices.

“When we open we plan to have 21 taps available that will likely include four to five IPAs, two to three dark ales, three to four lighter ales, five or so sours, a Hefeweizen, and a Kombucha.” The latter is a lightly fermented tea that contains probiotics. They also plan to offer 32- ounce cans called a crowler, Chism said.

Council is part of the San Diego County craft beer empire that now counts 151 breweries, about double the size it was just four years earlier according to West Coaster, the local industry magazine. That number includes breweries with multiple locations such as Karl Strauss with six, and Ballast Point with five. And very soon, Council Brewing with two.

Santee is home to four breweries. Besides Council, they are BNS Brewing and Distilling, Groundswell Brewing, and Pacific Islander Beer Co.

Chism says the goal is to have a soft opening at Santee on May 9 which would be the fourth anniversary of the Kearny Mesa brewery opening.

“We’ve got all the licenses from the state and the city. We’re just waiting to hear from the federal government (the Tax and Trade Bureau),” she said.

With the addition of five new workers, that will bring Council Brewing’s total staff to 16.