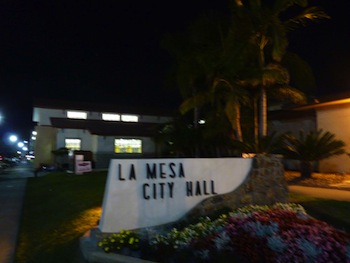 Mayor Art Madrid seconded that motion, and when it went to a vote, Ewin, Madrid and Councilmember Mark Arapostathis voted in favor of the motion to delay. Vice Mayor Kristine Alessio and Councilmember Ruth Sterling voted against delaying a decision.

“This gives me a chance to go out in the community for 60 days and do my own field research,” Ewin said after the meeting. “It’s not a matter of winning – it’s a matter of whether or not it’s the right thing to do.”

Gloria Carrillo, who spoke at the last meeting in opposition to the limits, spoke again on Tuesday night, as did Patrick Dean, who has twice run unsuccessfully for a position on the council. Despite his inability to unseat the incumbents, Dean said that he does not see a need for such a drastic change.

Those who are opposed to term limits, or opposed to the council putting the measure on the ballot, rallied around the argument that if term limits are something the people want, then someone should collect the signatures on a petition to prove it.

If citizens gained enough signatures on a petition to put the measure on the ballot, the decision would be out of the council’s hands.

“I would be much more comfortable if someone were to go around and collect the signatures needed and do the hard work to get people’s names to get this on the ballot, if you’re going to spend the public’s money,” Dean told the council.

Arapostathis said that his problem with this issue is equity.

“Another group came before us about two years ago, and they wanted something for us to approve on the ballot, and we denied them,” Arapostathis said. “They went out and got the signatures. And so I would say yes, the people do need to decide. But I think signatures need to be gathered.”

Arapostathis added that term limits should be reserved for those who are full-time, salaried politicians, and not for part-time city councilmembers like the ones who serve in La Mesa.

Alessio, who originally introduced this item at the last council meeting, argued again that she thinks it is a matter that the people need to vote on.

“I agree that there are good and bad arguments,” Alessio said of the council proposal. “All I’m asking is to put this on the ballot and let the people decide. I would like to just see it done orderly – and that’s why I’m proposing it versus signatures.”

I wonder why Mr Arapostathis thinks term limits are good for large city, full time council members but not for smaller part time councils. Seems to me that they are either good for all or bad for all. I agree with Ms Alessio that there are some good arguments on each side of the question. But I happen to think the arguments in favor are more compelling. Small jurisdictions are best served by ordinary citizens willing to do true public service. There are a wealth of intelligent people in La Mesa who could and would fit that requirement and bring fresh ideas and questions. Unfortunately incumbent name recognition and halo by association (with many of the best organizations and causes in the City) are such an advantage that incumbents rarely lose elections. Certainly, it is not too much to ask that incumbents, after 12 years in office, (Ms. Alessio's proposal) give someone else a chance to serve our wonderful City.

A double standard for and by the city of La Mesa?! Perish the thought!

I recall a few years ago this same city council wanted a tax increase. They did not go out and do the hard work to get signatures to put that on the ballot to spend the public's money. They simply voted to do so and then used taxpayer money to promote it. Me thinks I detect a double standard!