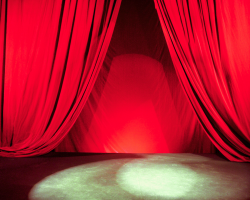 Updated April 11, 2014 (El Cajon) – By a unanimous vote, the El Cajon City Council on Tuesday asked the City Manager to prepare a request for proposal for groups seeking to rent or lease space at the East County Performing Arts Center.

The theater has been closed for several years, in need of major repairs. Recently Council voted to allocate funds for renovations and is now moving forward to attract additional tenants in hopes of reopening the theater  next year.

But some community members testified that they believe the city should first make good on its promise to hire a professional theater management company, before making commitment to lock in time blocks for groups such as the Rock Church, which wants to use the theater for church services on Sundays.

Ray Lutz, a cofounder of the Save ECPAC and Citizens Oversight groups, has raised objections over the city manager holding a private closed-door meeting with a representative of the megachurch. He contends that the meeting violated the Brown Act, the state’s open government law.  The City Attorney, Morgan Foley, has maintained that the meeting was legal.

Art Ballantyne, formerly with the El Cajon Historical Society, wants to see the city commit resources to hire professional management first and foremost.  The theater was built as a performing facility, not a rental space, he said.

But Williford insists that hiring professional management now would be a waste of money.

Any prospective renters or groups wanting to lease the theater will first have to demonstrate financial stability and provide a proposal.  Any proposals to lease or rent the theater will ultimately require approval by the City Council before the curtain rises once again at the East County Performing Arts Center.

Councilman Gary Kendrick spoke with ECM.  “I’m dedicated to reopening the performing arts center. We have to make sure it continues to be financially feasible. If we have one or two anchor tenants that can assure us a steady income stream to help pay for the fixed costs of operating a theater, it would help insure that the theater was financially successful.”

The request for proposal assures that all interested groups will have an opportunity to bid, not only the church, which “came to us,” Kendrick said, noting that in the past the Grossmont Community Concert Association has been an anchor tenant.  He added that while he’d like to have the theater be 100% entertainment,  having the facility devoted 70% to entertainment might be the best option to assure that in future lean years, “I’m not having to choose between putting Glen Campbell on the stage and putting police n the streets,” he concluded.