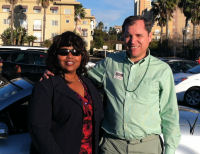 Thousands of spectators lined the parade route on Harbor Drive, from the County Administration Building to the Midway Museum, to see more than 60 community groups, marching bands, and government organizations from throughout the country participate in the event. 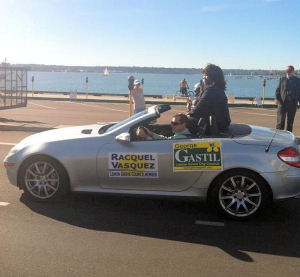 Sponsored by the Zeta Sigma Lambda Chapter of Alpha Phi Alpha Fraternity, Inc., the parade was kicked off by the Grand Marshall, Assembly Member Dr. Shirley Weber, immediately followed by Gastil and Vasquez, who rode on a silver convertible. The Council Members were joined by Vasquez’s daughter, princess for the Lemon Grove Princess Pageant.

“How appropriate that this year’s parade theme was Living the Dream – Let Freedom Ring,” said Gastil. “With Racquel being the first person of ethnic diversity on the Lemon Grove City Council, we not only honor his legacy, but we are actively taking up his charge in Lemon Grove.”

This was the first year Vasquez and Gastil participated in the parade. “This parade is a great way to pay our respects to one of the nation’s legendary figures,” Vasquez said. “More importantly, it offers all of us an opportunity to reflect on Dr. King’s legacy and to commit ourselves anew to his values and his dream.”