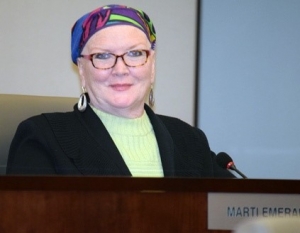 April 14, 2015 (San Diego) – San Diego City Councilwoman Marti Emerald has announced plans to retire at the end of her term next year.

Emerald has been battling breast cancer but posted on her Facebook page last fall that her doctors said she had an “excellent prognosis for full recovery.”

An advocate for public safety, communities and labor issues including reforms to aid taxi cab drivers and supporting a minimum wage increase, Emerald chairs the Councils Committee on Public Safety and Livable Neighborhoods.  She has served on the City Council since 2008.

She represented District 7, which included inland communities such as Del Cerro, Allied Gardens and San Carlos, before moving and winning election in District 9, which includes City Heights and surround communities from Kensington and Talmadge south to Mountain View and Southcrest. The district is heavily Democratic and Emerald, a Democratic in the nonpartisan seat, would have been heavily favored to win had she run for reelection.

Prior to her election to the Council, Emerald was a broadcast journalist for more than 30 years, including over two decades as a consumer “troubleshooter” on KGTV 10 News. She currently resides in the College area.