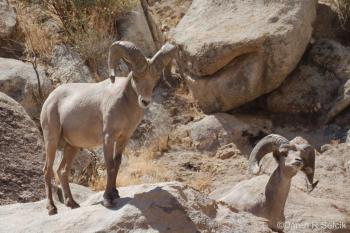 “We don’t count down in the south end of the park, only the northern areas and we hardly have resources to do that,” said photographer Daren Sefcik, a participant in the count.

The southern area of the park borders the  new Ocotillo Express Wind facility, which fragments bighorn territory and produces infrasound that some experts have suggested could be detrimental to the sheep.  The U.S. Department of Interior issued take permits to Pattern Energy, the project developer, allowing up to 10 bighorn ewes and lambs to be killed inadvertently without liability by the developer.

But this year’s high count may be inflated due to sheep venturing into more visible locations in search of water.

“Numbers this year were high, but only due to the drought as the sheep are desperate for water,” Sefcik said.  Then he revealed, “We had one dead at our site when we arrived and another die during the first day of counting…It really is that bad right now,; many of the year-round reliable water sources have dried up.

The official count does not list dead sheep.  Of the 332 Peninsular Bighorn Sheep counted, the tally includes 162 ewes, 95 rams, 42 lambs, 25 yearlings, and 8 not identified.

Twenty locations were included  in the county. Highest concentration (48)  of sheep was found at First Grove Palm Canyon.  Ironically, no sheep were found at Sheep Canyon.

Great photos and thank you for your efforts and dedication, Daren, and others!   :)

Too bad there's not enough resources to take care of the resources (counting bighorns) in the south part of the park.   It is extremely dry this year there, too.   Wonder where those sheep will roam to if their water supply runs low?

Read that some bighorns up north along the Ca/Nevada border are diseased.   Glad these ones are healthy, although not having enough water is just as bad or worse.