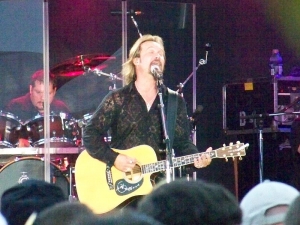 A Georgia native, Tritt is dubbed one of “The Class of ‘89,” which included Country music superstars Garth Brooks, Clint Black and Alan Jackson, all of whom dominated the charts in the early 90s. 2014 marked the 25th anniversary of Tritt’s music career, which proved to be busy with a heavy tour schedule in support of his recently released album titled The Calm After...

Tritt released the album through the label he formed in July 2013 called Post Oak Recordings. Included on The Calm After… is a duet with Tritt’s 15-year-old daughter, Tyler Reese. The song, “Sometimes Love Just Ain’t Enough,” is a cover of the 1980s pop hit. Four of the songs on the album, co-produced by Randy Jackson, were either written or co-written by Tritt.