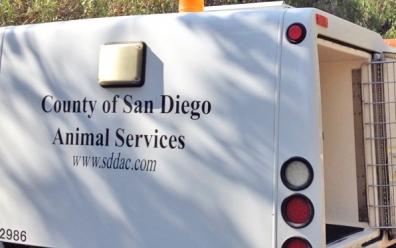 January 24, 2018 (San Diego’s East County) – County Supervisors on Tuesday approved a proposal to accept bids from outside animal welfare organizations seeking to compete against the County’s Animal Services Department to provide services in the County’s unincorporated areas, including rural, desert and mountain regions in East County as well as neighborhoods such as Spring Valley, Alpine, and Lakeside. In East County, the city of Santee will also be impacted.

Currently, Animal Services offers animal welfare, public protection, code enforcement, adoptions and sheltering for the unincorporated area and six contract cities. The County notified the cities of Carlsbad, Del Mar, Encinitas, San Diego, Santee and Solana Beach in May of last year that those contracts won’t be renewed when they expire on June 30th of this year.

The County took initial steps to outsource animal services for the unincorporated area based on Supervisors’ approval in March 2017. But the department and Service Employees International Union Local 221 later decided to pursue the managed competition process. The Board’s authorization Tuesday will allow both Animal Services and the San Diego Humane Society and S.P.C.A. to compete for the work.

The entity that offers the most economical and efficient proposal while still providing the best animal care will ultimately provide animal services in the unincorporated area, according to a press release issued by the County. A final decision is expected in August.

The idea of outsourcing the County’s Animal Services work has been controversial.  Residents in East County objected to receiving only last-minute notice about the only public meeting on the issue held in East County, which was scheduled during the work day when many could not attend.

On the other hand, some criticisms have been raised about Animal Services, notably during the 2016 Border Fire when inadequate funding for the department was blamed for a shortage of manpower to rescue or bring relief to pets and livestock trapped in the evacuation zone for days during triple digit heat, when many animals perished though others were rescued with help from Animal Services as well as private animal welfare organizations.

Whether private groups competing at lower wages would provide better or worse service to the public when needed 24/7 is a key concern with the County seeking to pare its budget for Animal Services even further, as well as the potential loss of union-wage jobs for workers.