Funds allocated for facilities, equipment and technology—but no money to hire more firefighters

"You are sitting on $700 million in reserves at a time when San Diego County has had more people burn to death in wildfires in the past decade than anywhere else in the nation,” - Steve Whitburn, candidate for Supervisor 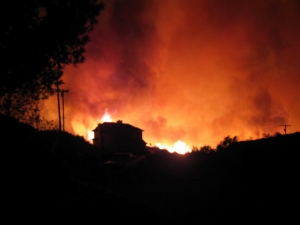 “There’s more to do, but we’re moving forward,” Supervisor Dianne Jacob said. The plan allocates $15.5 million a year to the County fire agency, but Supervisors approved only $5 million this year for start-up efforts.

The decision drew sharp criticism from Steve Whitburn, who is running against Supervisor Ron Roberts. “You are sitting on $700 million in reserves at a time when San Diego County has had more people burn to death in wildfires in the past decade than anywhere else in the nation,” Whitburn told the Board.

Unlike other major counties in California, San Diego does not have a County fire department. Instead, it recently established a regional fire authority with jurisdiction over a patchwork of fire agencies, including many staffed by volunteer firefighters. The County employs no firefighters of its own. 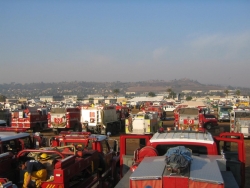 The plan approved Tuesday moves regional fire authority from the Department of Planning and Land Use to the County’s public safety group. The $5 million in first-year funding includes $3.85 million to improve facilities at volunteer and fire protection districts, $1.31 million to develop regional and satellite training facilities in El Cajon, Warner Springs, and Pine Valley-Lake Morena areas. It also allocates a modest $200,000 for day-to-day firefighter equipment and $100,000 for mapping technology needs.

But Supervisors opted against funding more full-time firefighter positions—a key element recommended by a committee of local fire officials who reviewed the study. They also declined to fund consolidation of the County’s five dispatch services down to two, which the County’s study had recommended. 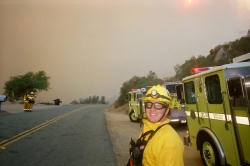 A study titled “San Diego County Falls Further Behind” published by the National University System Institute for Policy Research sharply criticized the County’s fire protection efforts.  According to that report, “In 2008-2009, the County of San Diego, the 18 cities, various fire protection districts andcommunity service areas budgeted $153.75 per capita for these services.

In contrast,the 12 government entities that fund fire and emergency services in Orange County budgeted more than $190 for each resident, while the 31 jurisdictions that directly provide fire services and EMS in Los Angeles County planned to invest $219 on a per capita basis.”

That gap continues to widen. San Diego firefighting agencies have increased cumulative per capita spending by 15 percent since FY 2005, while Los Angeles has increased spending by 21 percent and Orange County by 36 percent. 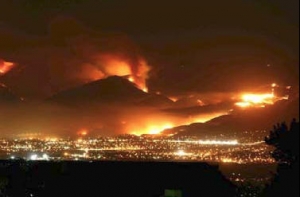 The NUS Institute study examined recommendations made by a Grand Jury and various studies on San Diego County fire protection issues. NUS concluded, “The most glaring failure by San Diego firefighting agencies has been the inability to implement recommendations that call for ways to increase the number of firefighters available during the initial hours of a wildfire event.”

The study warned, “Currently, for that kind of massive response to occur, it would mean that every community and jurisdiction in the region would send the majority of their on-duty staff to engage in the attack and leave the community minimally protected from other dangers, a scenario most fire chiefs are unwilling to authorize. As was the case in both the Witch and the Cedar fire, the level of potential regional response during the initial hours of a major wildfire continue to be hampered by the constraints on regional surge capacity.”

Roberts has expressed disappointment that voters failed to pass a ballot measure in 2008 that would have generated $50 million for fire protection. Supervisors contend that they’ve channeled over $200 million to fire protection in the County since the 2003 firestorm, which charred over 376,000 acres, burned 2,200 homes and killed 14 people. San Diego County, like other counties in California, have faced recent budget constraints due to state budget cutting and the recession.

Supervisors also approved Cal-Fire Chief Howard Windsor tol head up the County’s fire authority, while also continuing to be paid by Cal-Fire for his duties. He will have authority over all fire chiefs in County-controlled areas, including volunteer and local fire protection districts. 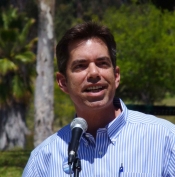 Supervisor Bill Horn said consolidating rural agencies was just as good as having a County fire department. “It doesn’t make a difference which patch these firefighters wear on their shoulders,” he said, adding that it’s how they work together on the ground to fight fires that matters.

Whitburn disagreed. “It’s time to do more than move the chairs around on the deck of the Titanic in San Diego County.”

In the original report to the Board of Supervisors, adopted June 25, 2008, that setup the San Diego County Fire Authority what they are doing now was called Phase 2. Problem is Phase 2 was suppose to have a paid Captain and 2 additional firefighters in EVERY station in the County, 24/7. It also required a commitment of at least 160 Million Dollars to fund it. Better consolidation and increased training capabilities is a good thing but as those smarter than me have pointed out boots on the ground, firefighters, put out fires not equipment. ( If the County ever fixes all the broken links on their website you mat be able to find the original report/plan? Key search words would be June 25, 2008 and County Fire Protection Plan.)