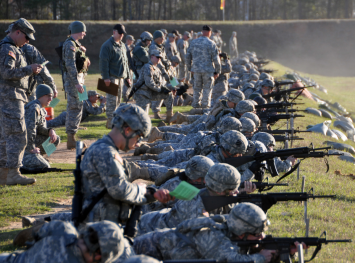 November 19, 2015 (Alpine) –The County Planning Commission last week voted to allow two additional appeals of an interim permit issued by the planning director for Covert Canyon to operate firearms training for military, governmental and law enforcement. The groups have 10 days to file appeals. A December 11th hearing is set to hear all appeals.

The appeals requests were filed by Danielle Belliveau on behalf of 15 Alpine residents and from attorney Marco Gonzalez of Coast Law Group representing Cleveland National Forest Foundation, Save Our Forests and Ranchlands, and the Coastal Environmental Rights Foundation.  Those requests were in addition to a previously accepted appeal filed by neighbors Clark and Robin Williams, who live within 300 feet of Covert Canyon. (See ECM ‘s previous article on the appeals and on the County’s interim approval of a stipulated administrative enforcement order. )

All three appellants are required to pay a $1,600 fee for filing the appeals, has drawn objections. Staff indicated that only planning groups can file appeals without paying a fee and that the planning group in Alpine declined to appeal the decision.

Gonzalez was the only public speaker, arguing against a $1,600 appeals fee levied by the County, since the “interim” permit allows the activities to occur unless an appeal is filed that results in a change of decision. No public hearing on Covert Canyon’s proposal has been held since 2010 and the property is surrounded by Cleveland National Forest property.

A staffer reported noted that Covert Canyon has a history of enforcement issues and said that the interim approval would require the applicant to comply with permitting “milestones” and give the county stronger enforcement ability.  Staff recommended granting the appeals requests.

Gonzalez argued that the appellants should not have to each pay an appeal fee and suggested the three appellants share a single fee. “What’s the rationale for collecting from each individual appellant if there’s not real impact here?” he asked, suggesting his clients could give testimony at the Williams’ hearing.  He said if an appeal was denied he would “run to the courthouse” to pursue legal action.

As for the interim approval allowing use, he state, “I believe I could go into court on that issue today” to seek an injunction on that issue.  He also suggested a CEQA appeal could also be made.

The chair asked staff to address the questions.  Staff clarified this would be a public hearing and testimony from other interested parties could be presented.  Staff indicated that if the Williams were to withdraw their appeal for any reason before Dec. 11 there would be a question on standing and the item would not be heard. Staff suggested the groups might “coordinate” with the Williams. Commissioner Peder Norby asked if the fee could be split, but staff said the fee ordinance set by Supervisors does not allow discretion to split the appeal fee, though groups could opt to work together in filing a single appeal.  He noted precedent for charging multiple appellants the full fee.

Gonzalez noted that his clients also believe the project, which includes firearms training at outdoor shooting ranges. does not fit within the zoning use definition for law enforcement training. That zoning ordinance reads:

The Law Enforcement Services use type refers to the provision of police protection by a governmental agency, including administrative offices, storage of equipment and the open or enclosed parking of patrol vehicles. (Added by Ord. No. 8175 (N.S.) adopted 11-18-92)

Supporters have previously contended that the project is needed to fill an need for law enforcement training locally.

Opponents have previously raised numerous objections including fire safety, noise and environmental impacts at the rural location in Alpine, suggesting that training should be done at a military base such as Camp Pendleton or another location instead.

The motion to accept the appeals carried 4-0, with commissioners Beck Barnhart and Pallinger absent.