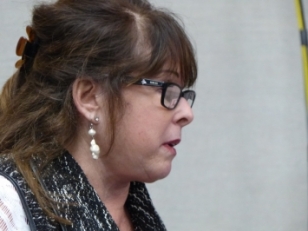 Next up, the state Department of Education will consider Grossmont’s request for a waiver of a public vote.  If the waiver is approved, the transition to trustee districts will be in place for the 2016 election.  If denied, a public vote would take place and if approved by the public, the changes would be delayed until 2018.

The County committee held six hearings across the Grossmont district to take public testimony before making its decision.  Although testimony at those hearings included some harsh criticisms of the map, the testimony at last night’s hearing was almost entirely in favor of the redistricting plan and map. 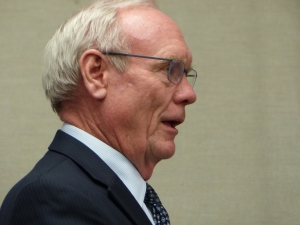 Grossmont Superintendent Ralf Swenson (photo, right) spoke first.  “Our district has no desire to risk a lawsuit,” he said, citing a need to comply with the state and federal Voting Rights Acts.  “This makes parts of the district have a better chance of representation.” He added that allegations of politics influencing the decisions are “unfounded” since the map was drawn by a demographer, not trustees.

Many have objected to pairing two trustees in one district, which pushes Priscilla Schreiber off the board when her term ends in November, leaving Robert Shield on for another two years representing the Lakeside area while assigning Jim Kelly to represent Alpine, though he has opposed a high school for Alpine that Schreiber has supported.  But Swenson stated that avoiding pairing is “not possible while still complying with state and federal law.” Alpine has a lawsuit against the district and a unification petition to leave the GUHSD and join the Alpine Union School District, but Swenson said those issues should “not be considered” in the redistricting process.

James Messina testified in support of the plan and thanked the board for holding a hearing in district 1, the Lemon Grove/Spring Valley area that will become a majority minority district with an open seat.  “This will help a lot of people,” he said, adding that Alpine residents can “fix” their problem by voting for whoever they want in2018.

Andrew Alvarez, a Mount Miguel High School student, said Spring Valley should “have a representative who can understand our demographics and our culture.”  Several other students voiced similar sentiments, as did parents from the Spring Valley area, which one referred to as “blighted” with “poverty and strife,” adding, “the change we deserve should not wait.” 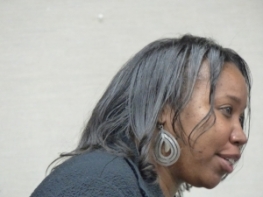 Kimberlee Hedrick (photo, left), principal at Mount Miguel, noted that some have asked “Why the rush?” to redistrict.  She responded, “Come to my high school and walk the halls.”  She, too, supported the plan.  A former principal of Valhalla also spoke in favor.

Gary Wood, a trustee on the GUHSD board, insisted, “There was no political conspiracy, no gerrymandering, no attempt to take anyone off the board.”

“Delaying this is denying students in our area the representation that they need,” said Sylva Lopez, parent of a Monte Vista student.

A La Mesa man who said he’s a taxpayer without kids in schools asked the board to “not make us waste money on a lawsuit” and approve the plan.

But another speaker, Tom Varallo, voiced concerns.  He said the GUHSD “did not do a language study,” noting that the California Voting Rights Acct offers protections to language majorities and communities of interest. He objected to the map splitting Iraqi Chaldeans up into three districts and noted that the district currently provides materials in three languages: Arabic, Spanish and English.

Trustee Priscilla Schreiber, who stands to lose her seat on the GUHSD board, said she realizes she is the”sacrificial lamb.”  Though she supports trustee elections she has voiced opposition to the map and had sought to avoid having any member forced off through pairings of trustees whose terms end at different times.  “Think about what will happen to this district,” she implored “I am the only voice in two and a half days of trial this week for the disenfranchised community of Alpine,” referring to the ongoing trial against the GUHSD filed by Alpine taxpayers and the Alpine Union School District seeking to have bond funds intended for an Alpine High School turned over from Grossmont to the Alpine district, since Grossmont has refused to build the school after voters twice approved bonds that included funding for that purpose.

Mark Anderson on the county committee noted that at all of the hearings, “everybody liked the idea of representation” though some had concerns over the process.  He voiced a concern of his own. “I live in Santee. I was never contacted….so I’m disappointed in the process as a constituent and an education professional.  But you don’t throw the baby out with the bathwater. This strikes at the very heart of how we elect people in a democracy.”

Anderson said he was “very disappointed in the board of the Grossmont Union High School District” on some matters, but noted that “there will be a way to exercise the vote” for some in 2016, and for others in 2018.

Rich Shea said that “while not perfect” he believes the process has been “sufficiently done” and noted that in the future, Alpine representative Kelly “could lose an election.”

Guadalupe Gonzalez noted that the district’s demographics are in flux and that the next census may show major changes.  But she, too, voiced confidence in the demographer. “We need to make sure we are in compliance with the California Voting Rights Act,” she said. “We can’t rtake into account protecting board members or when or if Alpine unification will proceed. We can’t consider the complaints against the GUHSD, and there are many…Their dismissal of the Grand Jury findings are extremely troubling.” 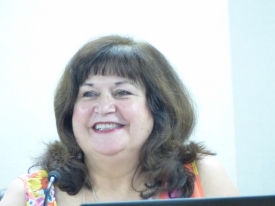 Alicia Muñoz (photo, right) noted that the six hearings enabled the committee members to hear people’s voices, and that there was support overwhelmingly for trustee areas. “It’s the law. It has to happen,” she said, but added, “Sometimes there are unintended consequences and a beloved trustee loses their seat…We have to support this, but I am very unhappy at the lack of trust (voiced by some district residents in the GUHSD board)…how Alpine feels they have not been treated fairly. That really resonated.”

Then she pointed out, “We can make a recommendation that the staste not accept the waiver because a public vote is important.”

Votes were then held on the shift to trustee districts and  support for map. Both were approved by unanimous votes.

Afterwards,  Muñoz asked again about making a recommendation to the state, but Dr. Randolph Ward, the Superintendent, noted that such an action item would require a two-thirds vote and was not agendized. To vote immediately could be a Brown Act violation, Robinson observed.  However a waiver recommendation could be considered for a future agenda.

GUHSD residents who voiced concerns over Trustee Jim Kelly being assigned to Alpine and his derisive treatment of those with whom he disagrees may take solace in one fact: if the state approves Alpine’s unification request to allow Alpine and Blossom Valley residents to leave the Grossmont district, Kelly, now a resident of Blossom Valley, would become ineligible to serve on the Grossmont board in the future.

District residents who wish to voice their views to the California State Board of Education regarding the GUHSD request for a waiver of a public vote on redistricting  prior to the board's May 11-12 meeting may contact: