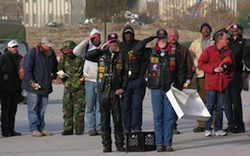 June 3, 2013 (San Diego) – Some 40 more homeless veterans in San Diego County will gain a roof over their heads after the federal government announced it would award $332,731 to the County’s Department of Housing and Community Development (HCD).

As part of a national campaign to end veteran homelessness by 2015, the federal Department of Housing and Urban Development’s Veterans Affairs Supportive Housing (HUD-VASH) program has awarded the County’s Housing Authority VASH awards in 2009, 2010, 2011 and 2012 that allow for the housing of up to 305 veterans and their families. The new award combined with the previous funding awards will allow HCD to provide housing assistance for up to 345 veterans. Currently, 271 veterans have homes because of the HCD-administered VASH program. Another 30 veterans have also received housing vouchers and are searching for places to live.

During a point-in-time count last January, the number of overall homeless in San Diego County came to 8,900. Nearly 17 percent or 1,486 were homeless veterans.

“Not only are homeless veterans dealing with mental and physical effects of their wartime experiences, they are trying to survive in an economy that is still recovering from its downturn,” said Board of Supervisors Chairman Greg Cox. “These vouchers are a way of helping veterans who have served their country get back on their feet.”

The HUD-VASH program is a collaborative effort between HUD and the Department of Veterans Affairs (VA) to provide permanent housing and case management for homeless veterans. Those who qualify, receive a housing voucher to help pay their monthly rent.

The HCD vouchers are available to eligible veterans in the County’s unincorporated area and 36 communities. The Consolidated and Further Continuing Appropriations Act for 2013 provides funding for almost $75 million of new incremental vouchers for the HUD-Veterans Affairs Supportive Housing program nationwide. HUD expects to announce more funding this summer.