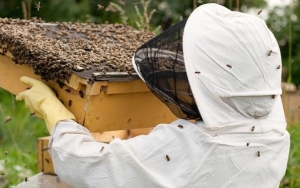 November 3, 2014 (San Diego)--The County Board of Supervisors has taken another step forward in plans to promote beekeeping and agriculture while protecting the public by directing their staff at last week’s meeting to begin the final steps in creating a proposed “tiered” beekeeping ordinance.

The ordinance is expected to be brought back to the Board for a vote in a year. If ultimately approved, it would allow hobbyists and commercial beekeepers to keep hives closer to roads, property lines and homes in the unincorporated areas than current rules, but far enough away to keep people safe. The distance would depend on the size of the operation.

Board Chairwoman Dianne Jacob brought the idea of updating the County’s beekeeping rules to the Board last October after talking with beekeepers and the San Diego County Beekeeping Society, who said County regulations were making it tough for beekeepers to prosper. In addition, scientists and beekeepers worldwide have been reporting for years that populations of honeybees, which are essential to agricultural production, have been drastically decreasing.

At Wednesday’s Board meeting, officials from the County’s Agriculture, Weights and Measures Department (AWM) said they were proposing three tiers of distance regulations for beekeepers after working extensively with beekeepers, the beekeeping society, community planning groups and the San Diego County Farm Bureau.

Backyard hobbyists would be allowed, generally, to keep two hives within 25 feet of roads and property lines, 35 feet from neighboring homes and 150 feet from sensitive sites — places where there may be small children, the elderly, confined animals or others that might be physically challenged.

Small commercial beekeeping companies would be allowed to have up to 20 hives within 50 feet of roads and property lines, 100 feet from homes and between 150 feet and 300 feet from sensitive sites, depending upon their number of hives.

Large commercial beekeeping companies would be allowed to have unlimited number of hives within 50 feet of roads, 300 feet from homes and 450 feet from sensitive sites.

Current County regulations require all beekeepers, small and large, to keep hives 100 feet from roads and 600 feet — two football fields — away from homes.

The new County rules would be contingent upon all beekeepers keeping docile European honeybees, registering themselves as beekeepers — currently required by state law — and following the most up-to-date beekeeping practices.

Supervisors Wednesday also accepted a list Wednesday of 19 County-owned properties in the unincorporated areas, including parks and preserves, that could become beekeeping areas.

Jacob said a key to the Board’s approving any ordinance that was brought back to it in a year would be to include an aggressive enforcement plan that would educate beekeepers, make sure they were following the rules and remove hives if people violated the rules.

“There has to be the carrot and stick approach in order for this ordinance, eventually, to be supported,” Jacob said.