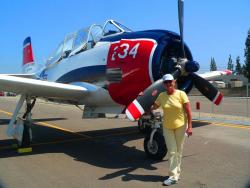 Robert Germann told the Board that he opposes the agreement since it does not include the City of Santee. He told Supervisors,“Santee should have a seat on the board. I am surprised they are not here demanding one.” The airport has one gate exiting into Santee, built at Santee’s expense.

Germann also said the Council is not responsive to the community. He added that the FAA wants to get a training center at Gillespie, and that training aviation has been there for a while. Citizens have recently raised safety concerns over an increasing number of flights over homes nearby from foreign flight students now being trained at the site.

He pointed out that the Helix Water District yard is where fuel will be stored and moved to the airport, raising safety concerns. Germann wants to see the Council dissolved, not renewed.

Sue Stromm, member of the steering committee for the Advocates for Safe Airport Policies (ASAP) told Board Members that “The current members on the JFTC do not care about the residents around Gillespie Field.” She claimed that a member of the Council turned his back as members of ASAP spoke to them. She added there was an altercation that almost became physical at the parking lot last November.

A culture of “pettiness, nastiness and arrogance” has been created she added.

Ed Blitz went a step further, asking the Board to eliminate this Council. What the citizens need is a far more responsive board to the citizens of Lakeside, Santee, El Cajon and the East County in general, he contends.

Betty Chaffiz echoed Blitz and added that there has to be a “willingness to incorporate wellness and decent quality of life for our airport. Those presently serving do not have a clue as to what all is that about.”

Chairwoman Dianne Jacob, after listening to the concerns, put a measure on the floor that renewed the Board for four years, but she added that Santee will be contacted to ask if they want to participate, or have a seat at the table. She added that the behavior detailed by the presenters is not adequate, and that “personnel issues have to be dealt with in time.”