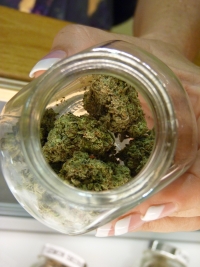 “We had one medical marijuana dispensary that has been in operation for about 6 years and another 2 years... From a law enforcement stand point they did not present any problems,” said Supervisor Cox.  “I hate to be in this position where we have a conflict in state law and local law. The people of California have voted that they want to see medical marijuana in place."

But Chairwoman Jacob, District 2, indicated that although state Proposition 64 legalized recreational marijuana for private use, marijuana use is still illegal under federal law. Though the Obama administration instructed its Justice Dept. not to enforce federal laws in states that had legalized pot, it is unclear whether the Trump administration may order a crackdown.  Trump's Attorney General nominee has voiced opposition for marijuana legalization.

“What we are talking about is the commercialization of marijuana. I do not want to see San Diego County become the capital of marijuana,” said Supervisor Jacob. “There are more Mexican cartel, for example, in Colorado. They do not have to pay the taxes. They do not have to pay the fees. They undercut the market in Colorado. This is not a desirable use of our land. As far as agriculture, grow grapes; they take less water than avocados and marijuana.”

Anthony Wagner, chair of Southern California Agricultural Program testified in favor of allowing marijuana to be grown by local farmers, “The state of California has already declared cannabis an agricultural product. Local farmers need the opportunity. We are asking for 5,000 square feet not fields of cannabis. The average cannabis farmer makes $40,000 to $90,000 and average farmer makes $19,000, below the living wage.”

Wagner is also the executive director of the Southern California Responsible Growers Council.

Once approved, pending a March vote, the ordinance bans all nonprofit and for profit marijuana facilities in unincorporated areas including store fronts and cultivation. Planning staff’s draft of a ban ordinance includes an amortization clause with a five-year term and a six-month extension. The term gives facilities currently open at Gillespie Field and Ramona time to recoup their costs before facing shutdown.

“When presumption of harm is down, drug use goes up. When people are under the influence of marijuana, they make wrong decisions.  Drug driving is just as much dangerous as drunk driving,” she said. “Drug driving is becoming more and more prevalent. Marijuana is still a drug even when used as a medicine.”

Ramona resident Brian Herrera commented that marijuana, as a substitute, is “helping people get off opiates, and we have an opiate epidemic in this country.”  His daughter, whom has seizures with a brain tumor, attends Ramona Unified School District. Herrera travels to Beverly Hills in LA County for the oil or edible version of marijuana. The oil prevents the seizures and is provided before and after school.

“At eight months old, she was not expected to live. The pharmaceutical pills have severe side effects. A local children’s hospital allows for her to be admitted with it,” he said. “The one (marijuana dispensary) in Ramona is not allowed to sell edibles, the oils are considered edibles, so it is not as readily available as they are in LA County.”

The Compassionate Use Act of 1996, within the state health and safety code, was created partly to “Encourage the federal and state governments to implement a plan to provide for the safe and affordable distribution of marijuana to all patients in medical need of marijuana.” The act also cites, “Nothing in this section shall be construed to supersede legislation prohibiting persons from engaging in conduct that endangers others, nor to condone the diversion of marijuana for nonmedical purposes.”

Jim Whalen of J Whalen Associates, 1660 Hotel Circle North, said that marijuana has the potential to bring “$6.2 billion to the economy.” The option provides a “Consensus between community groups and council, and prevents proliferation addressing the black market.” Whalen’s mother in law uses a balm.

“It (option presented) affirms the legitimacy of legal marijuana users and the patient’s needs,” he said. “Finally, because we have a legal way forward it provides a way forward. It respects the grandfather business applicants. I urge your support of option 8.”

Litigation in 2008 and 2009 required regulation regarding a facility in Riverside County.  San Diego's board decided to move forward with a moratorium.  Since that time, a facility in unincorporated El Cajon operated along with a facility in Ramona near the airport.

Chairwoman Jacob drawed attention that the board of Spervisors attempted to have the Supreme Court review the case with no avail.

“Just to make it clear that marijuana of any kind is illegal under federal law. Somehow, that seems to be lost in our discussion. It was this board that tried to get that court decision all the way up to the Supreme Court," but the Court has not agreed to hear the case, she added.  "I am not going to debate whether or not there is medicinal purpose for marijuana. If there is a medicinal use for it, then it should go through the drug stores and it (marijuana) should go through the same process.”

Chairwoman Jacob argued for the moratorium, noting “If people want to access marijuana, there are 15 dispensaries in San Diego," meaning the city, not the unincorporated regions.

"My understanding [is] those that have been operating and have vested rights may still continue to operate," says Supervisor Roberts. "Two years ago I began work with people at USD… I am convinced that there are patient benefits. I am not going to support the moratorium.”

The board meets Feb.14 and casts a final vote March 15, following a moratorium effective within 30 days.

Its a good decision and every country should follow San Diego's footsteps. There are many legal attorneys who promote as well support such moves and who are willing to offer any legal advice in such cases so we should definitely make use of these resources and try to solve this problem.
Seems to me that it would lots easier just to get rid of the Supervisors than to go backwards and outlaw weed. At the very least this should be submitted to the people for a vote. And for all of the bleeding hearts who are so concerned about weed and driving, why not address 'alcohol and driving' which is at least ten times as deadly. Either address the REAL problems facing society or STFU!