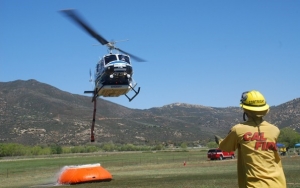 Supervisors each voiced support for the enhancements, before unanimously approving them.

The wildfires that struck this past May served as a reminder of the region’s year-round fire danger as well as this year’s dire conditions. After the wildfires, County officials took immediate steps to enhance emergency planning and firefighting resources, much of them listed as recommendations in the County’s May Wildfires After Action Report. Some also came out of meetings the County held with other elected officials, fire chiefs, tribal nations and military representatives to brainstorm fire preparation.

Among those actions, the County also launched the Get Fired Up, San Diego wildfire preparedness campaign to urge residents to prepare for potential wildfires by getting Ready with defensible space, getting Set with an emergency plan, and if the fire risk is near, pre-packing the car to Go.

At Tuesday’s meeting, the Board approved:

In other emergency-related matters, supervisors also voted to:

...BS, BS, BS. Campo and Boulevard are dark now about 20% of the time. Good job Board of Supervisors. I am sure this new, leased, Helo, with a bambi bucket on the end of a swinging 100 foot line, will solve our problems and we will not need any actual firefighters on the ground.