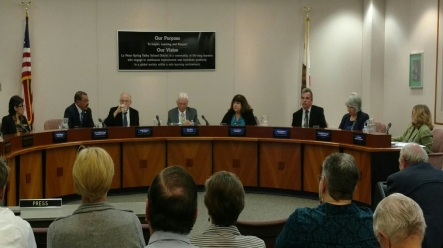 March 27, 2016 (La Mesa) – Turnout was light at the first of five county hearings March 17th on a controversial redistricting plan proposed by the Grossmont Union High School District.  Members of the San Diego County Office of Education ‘s Committee on School Reorganization emphasized that they hope to see more public turnout and hear from a broad cross-section of the community at the upcoming four hearings.

Under Grossmont’s proposal, the district would be divided into geographic areas with one board member, or trustee, living in each district elected by voters living in the area.

The County Board of Education is seeking input from parents and the community because this will affect the way people will be represented on the school board from now on.

The proposed election changes arose in response to a letter from area charter schools, which tend to serve minority groups, claiming violation of the California Voting Rights Act.  The purpose of the “Act” is to help empower “protected classes” to have an adequate chance of electing one of its members to office.

At the first hearing March 17th, 37 people met at the La Mesa/Spring Valley school district board room.  The public was invited to comment.  Assistant Superintendent Lora Duzyk reviewed the purpose and scope of the meeting and provided background information.

The GUHSD is proposing a change in the way governing Board members are elected from “at large” representation where every voter in the District elects all five Board members regardless of where the members live within the district to “by-trustee areas.”

The purpose of this change is to make schools better by encouraging a more democratic way of choosing school governing board members.  This is done by dividing the school district into regions that reflect the minority demographics and represent the particular educational needs of the sub-regions represented and ultimately students will be better served.

Lora Duzyk, Assistant Superintendent, said that if the proposal is approved it will go to a vote of the people.  However the GUHSD has asked for a waiver of the rule from the State Board of Education.   Waivers are routinely granted because of the cost of holding elections.  These actions, if approved by the County Committee and the State board, would bypass GUHSD voters.  The election process would be changed without local voters being given the chance to decide before November 8th.

Ralf Swenson, Superintendent of the Grossmont School District was the first to speak.   He explained that the proposal and map were to drawn to comply with the California Voter Rights Act and were not political.  A slide presentation prepared by the National Demographics Corporation (NDC) showed two maps meant to create a region with a significant minority population or minority majority as it is called.

According to NDC maps and graphs Latino, African-American and Asian people are fairly equally living throughout the school district.  When their numbers are combined the Lemon Grove/La Presa region (as the map is drawn) would be a minority majority area with 51% minority population.

National Demographics Corporation was hired by the GUHSD to divide the School District into five parts with roughly the same amount of people in each.  Some areas of the District are heavy with immigrants, for instance, which have unique training and language needs.

Likewise, the more rural backcountry of East County is huge geographically in comparison with all the others combined and would likely have safe transportation and other unique needs on the minds of parents there.  The Chaldean community was not mentioned in the NDC presentation, nor where the three major Native American tribes in the Grossmont District (Barona, Sycuan and Viejas).

The proposed map would carve out a new majority-minority district for the Lemon Grove/Spring Valley region starting the November 2016 elections.  Board Member Priscilla Schreiber would be sacrificed, put into the same district as Robert Shield. Since Schreiber’s term ends two years before Shield’s, she would be booted off the board after the November election and could not run again for at least two years.

Public comments were heard and 12 speakers came forward.  All but two were in favor of the proposal; seven were employees of GUHSD, two were Governing Board members, two principals, two teachers, one student and one parent.

The first speaker was Fran Zumwalt the president of the Grossmont Education Association who spoke in favor of the proposal.  She represents all the school district’s employees who are teachers, counselors and administrators.  She put the matter to a vote of the executive board of the GEA.

Raymond Lucas, a junior at Mt. Miguel High School, spoke in favor of the proposal saying it was best for students.

Kim Hendrix, Randy Montesento and Elizabeth Hernandez are all principals in the School district speaking in favor of the proposal

Liza Stuart was the only parent to speak.  She is in favor of the proposal and the waiver.

Nick Marinovich, former committee member spoke against the proposal asking, “Why the rush?  Where are the Chaldeans in this?   Why is this being rushed without public input?”

Jim Kelly, a trustee with 14 years on the board, spoke about the alleged politicizing of the process. “This is an easy one if you just look at the facts.  They tried to get one board member in each district, but could not because two of them lived in the same neighborhood.  Ideally each region would have one Governing Board member living in each district,” Kelly said adding, “Unfortunately that can’t always be done.  Sometimes there are two or more living in an area.”

However, Kelly seemed more concerned over revelations in the press.  He went on to say, “You are going to hear a lot of rhetoric from Nick Marinovich, who is extremely tied to Ms. Schreiber and there’s these articles by a very dishonest person who poses as a reporter, I’m talking about Miriam Raferty [sic] who only talks to people like Nick Marinovich and Priscilla Schreiber and never anyone of the other Board members.”  (Editor’s note:  See our rebuttal to Kelly’s false and slanderous statements about our editor, Miriam Raftery, and our award-winning publication here: http://www.eastcountymagazine.org/guhsd-trustee-jim-kelly-slanders-media-dodges-interview-requests_

Governing Board member Priscilla Schreiber spoke at length about the lack of input from the community.   She said, "The so-called threatening letter that started this whole process was never discussed in committee.”  The action taken by the Board majority was taken against one dissenting voice, hers, she asserted.

The County Committee on School District Organization spoke in conclusion saying they were concerned that the community had not been adequately heard.  “It's how this map was developed.”   “There are vested interests, everything is politics and mostly staff spoke.”  The committee questioned whether schools had sufficiently informed parents about the meetings.

Committee Chairman Gregg Robinson, PhD, concluded, “There is concern about outreach, especially to parents.  Were robo calls made?  I would like to hear more from the Chaldean community.   They are not a ‘protected class’ but certainly a community of interest.  Two parents showed up and a whole bunch of staff.  I have questions for the demographers specifically.  How will a possible Alpine defection affect this?  We look forward to the coming meetings for more input from the community.”

Below is the schedule of upcoming meetings: