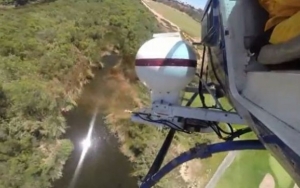 August 12, 2015 (San Diego)--San Diego County’s environmental health department will conduct its sixth aerial drop of larvicide of the year on wetlands around the county Wednesday to help keep mosquito populations down and West Nile virus at bay. 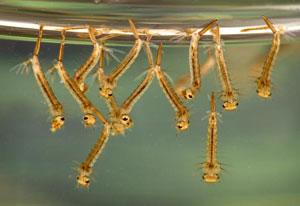 No one has been diagnosed as becoming infected with West Nile virus here in San Diego County so far this year, but the County Department of Environmental Health’s Vector Control program has collected more infected dead birds and batches of mosquitoes with the virus in 2015 than it has in several years. Mosquitoes can transmit West Nile virus to people by feeding on infected birds and then on humans.

The County started using a helicopter to precisely drop batches of solid, cereal-sized larvicide (a pesticide targeting the larvae stage of insects) on roughly 48 local waterways — ponds, rivers and wetlands — to control mosquito populations more than a decade ago after West Nile virus first arrived in the county. The County conducts the drops roughly once a month during mosquito season. The larvicide contains a bacterium that doesn’t hurt people and pets, but kills mosquito larvae.

Temperatures around the county are expected to soar this week, and late summer is typically the peak of the West Nile virus season.

County officials reminded the public that they can protect themselves by following the County’s “Prevent, Protect, Report” advice.

Prevent Mosquito Breeding: Dump out or remove any item inside or outside of homes that can hold water, such as plant saucers, rain gutters, buckets, garbage cans, toys, old tires, and wheelbarrows. Mosquito fish, available for free, may be used to control mosquito breeding in backyard water sources such as unused swimming pools, ponds, fountains and horse troughs.

Protect Yourself from Mosquito Bites: Protect yourself from West Nile virus by staying inside when most mosquitoes are most active, at dusk and dawn. Wear long sleeves and pants or use repellent when outdoors. Use insect repellent that contains DEET, picaridin, oil of lemon eucalyptus or IR3535. Make sure screens on windows and doors are in good condition and secured to keep insects out.