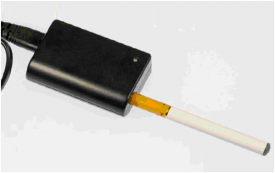 November 6, 2013 (San Diego)--The popularity of electronic smoking devices is increasing and on Tuesday the Board of Supervisors directed staff to review the County’s smoking and tobacco use policy to determine how “e-cigarettes” fit into it.

County Health and Human Services Agency (HHSA) staff were asked to come back to the Board in 90 days with recommendations to address electronic vapor devices. The battery-operated devices vaporize liquid nicotine into an aerosol mist that can be inhaled or “vaped.”

The supervisors said they are concerned the vapor inhalers could lead to increased tobacco use, especially in young people since e-cigarettes are sold and marketed in fruit and candy-like flavors.

“What I worry most about is your youth and their thoughts about these electronic vapor devices,” said Supervisor Dave Roberts. “I am worried about the perception of traditional cigarettes and e-cigarettes and how they’ll dramatically undermine all the efforts we’ve put into prevention and anti-smoking in the region.”

Research by the U.S. Food and Drug Administration revealed that in addition to the nicotine, e-cigarette cartridges also contained cancer-causing chemicals and other toxins, such as diethylene glycol, an ingredient used in antifreeze.

A recent survey by the Centers for Disease Control and Prevention found that 1.8 million high school and middle school students tried e-cigarettes in 2012, a 100 percent increase from the previous year.

“When it comes to our youth, there is no question that they should not be using these things…they should not be buying or able to buy these devices,” said Supervisor Ron Roberts. “What we need is for HHSA to help us determine how electronic vapor devices and nicotine-containing cartridges should be incorporated into our policies. We need to come up with some sensible regulations.”

Supervisor Bill Horn, however, has said he would not support regulation of electronic cigarettes, because he believes they can help some smokers stop smoking more harmful electronic cigarettes. The devices also reduce secondhand smoke that others are exposed to from smokers.