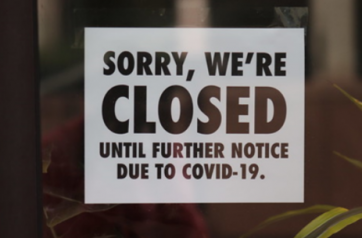 The County yesterday announced that it has issued cease and desist letters to 10 businesses and churches caught in “blatant and willful” violations of purple Tier orders banning indoor operations for worship services, restaurants and gyms, according to Greg Cox, Chair of the County Board of Supervisors.  The County has also sent letters to all regional mayors urging help to enforce public health orders.

But El Cajon Mayor Bill Wells has thus far defiantly told media outlets that his police will not prioritize enforcement.

The cease and desist letter recipients include one East County business, Meat Monsters Grill in Ramona, where a county inspection found “indoor operations and no face coverings by patrons and employees,” according to a letter from the county’s public health officer, Dr. Wilma Wooten. The letter threatens a $1,000 fine per each violation.

“Just three weeks ago, we have 300 daily cases,” Cox announced.. “The surge is now here.” Of added concerns, hospitalizations and the rate of positive test results have also increased as people move indoors and become lax about avoiding gatherings and taking safety precautions.

Due to a lag between diagnosis and hospitalizations, the situation is “dire,” Supervisor Nathan Fletcher warned. “We don’t want to end up like communities across the U.S. with challenges in their healthcare system.”  That could lead the county to impose even tighter restrictions, further impacting the economy.

While Dr. Wooten and Supervisors voiced empathy with businesses and individuals frustrated and suffering economically due to shutdowns, all agreed the steps are necessary short term to save lives.

At the state level, Governor Gavin Newsom yesterday extended Purple Tier designation, the most severe level, to 41 counties – nearly all of California.  The Governor indicated he is considering a curfew and other more drastic measures, noting that with a vaccine now close at hand, “This is a spring, not a marathon.”

Dr. Wooten similarly stated, “Light is at the end of the tunnel…There are two vaccines on the horizon.”  Pfizer and Moderna announced last week that their vaccines are 90% and 95% effective; the companies  hope to begin distribution by year’s end with more widespread distribution rolling out in 2021.  Dr. Wooten says many lives can be saved, “If we can just hold on for the next two months.”

With Thanksgiving fast approaching, health officials are urging people to consider foregoing traditional holiday gatherings and consider virtual dinners or other online activities, such as games with friends and family. If you do celebrate at home, limit gatherings to no more than three households and preferably, only your own.  Serve dinner outdoors, keep masks on when not eating or drinking, and maintain six feet of social distance.

More cease and desist orders are likely to be issued, with many more violations documented over the weekend.  The public is encouraged by the county to report violations by calling (858) 694-2900 or emailing safereopeningcomplianceteam@sdcounty.ca.gov