"This is one disease that physicians are really afraid of," -- Dr. Mark Sawyer, Rady Children's Hospital and UCSD School of Medicine 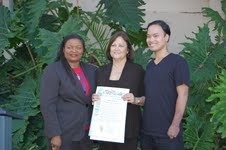 September 29, 2011 (San Diego) – Preteens and teens are at increased risk of meningitis—and death rates are up to five times higher among teenagers and young adults compared to other age groups. The disease is preventable –yet vaccination rates are low locally among teens and preteens, those most at risk. Statewide, over one-third of those 13-17 have not been immunized. Now County officials hope to change that.

Jonathan Deguzman, a San Diego State University student who contracted the disease and lost his fingers and both feet as a result, was among those on hand at a press release held by health officials in San Diego yesterday to urge that teens and preteens be vaccinated.

"I didn’t know how devastating this disease can be, until I experienced it firsthand,” Deguzman said. "No parent should have to watch their child suffer the way my parents did...If my parents had known I was at risk for contracting the disease and there was a vaccine to help prevent it, I would have been vaccinated."  He added that he is speaking out to prevent other families from going through the ordeal that his family endured.

“This is one disease that physicians are really afraid of,” Dr. Mark Sawyer, M.D. of Rady Children’s Hospital, also a professor of clinical pediatrics at the University of California San Diego School of Medicine.

The remarks came at a press conference yesterday organized by the San Diego Health and Human Services Agency and the California School Nurses Organization declaring the week of September 26 Meningitis Awareness Week as part of Voices of Meningitis, an educational campaign uniting school nurses, parents, survivors of the disease and public health officials to help education families about the dangers of meningococcal meningitis and the importance of vaccines.

"Vaccination for meningitis is recommended for all adolescents," said Wilma Wooten, County Public Health officer.  "More than a third of California adolescents have not been vaccinated…We need to do better, and we can do more.”

Meningococcal disease can be difficult to recognize, especially in its early stages because meningitis symptoms are similar to those of more common viral illnesses. But unlike more common illnesses, meningococcal disease can cause death or disability within just 1 day. Many who survive can be left with serious medical problems that may include amputation of limbs, fingers, or toes, severe scarring, brain damage, hearing loss, kidney damage, and psychological problems.

Even people who are usually healthy can get meningitis. However, data from the CDC shows that the risk of getting meningitis increases in teens and young adults.

Common everyday activities can spread meningococcal disease. This includes kissing, sharing utensils and drinking glasses, living in close quarters such as a dormitory or summer camp, and smoking or being exposed to smoke. Activities that can make teens feel run down may also put them at greater risk for meningitis by weakening their immune system. These include staying out late and having irregular sleep patterns.

The CDC recommends vaccinations for preteens and teens starting at age 11, with a booster dose by 18.