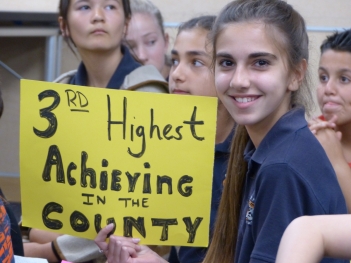 April 14, 2016 (La Mesa) – Students, parents and staff from the College Preparatory Middle School in La Mesa packed the County Board of Education’s hearing room last night, urging board members to approve an application to approve a new charter school.

“Our school is one of the top three middle schools in the entire county, but the La Mesa Spring Valley School District is suing to shut us down,” Mitchell Miller, cofounder of the school, told the board.  “Our continuing success is why La Mesa Spring Valley sued us.”  He accused Superintendent Brian Marshall of “horrendous misrepresentations” and contends the Superintendent never submitted the petition to his board.  “We have a six-year track record of success,” added Miller, who urged the County Board of Education members to “come to our school before voting.”

But by a 4-1 vote with Mark Anderson abstaining, the board voted to deny the petition.

The vote drew gasps and angry shouts from the crowd. “Your staff never came to visit us,” one audience member blurted out. Another shouted, “It’s a disgrace.”

The board resolution found that the charter presents an “unsound educational program” for pupils, that petitions are “demonstrably unlikely to successfully implement the program set forth in the petition” and that the petition “does not contain reasonably comprehensive descriptions of all the 16 required elements of the petition.  Exhibit “A” detailed those elements.

College Preparatory Middle School (CPMS) sought to build a new facility at 10269 Madrid Way, Spring Valley. But staff found inadequate evidence that enrollment would grow from the present 240 students to 300,nor was staff convinced that construction and financing plans were adequately in place.  The school, established six years ago, has nearly tripled its enrollment over that time.

According to the school’s website, “CPMS earned an impressive 941 API on the 2012-13 California Standardized Tests (CST/STAR) and, according to the most recent California Title Company report, CPMS is listed as the 3rd highest ranking middle school in San Diego County.” 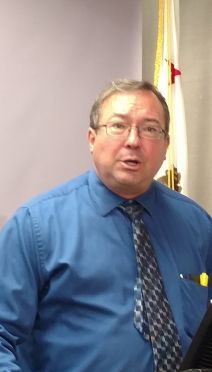 The school, located in the basement of a church on Jackson Drive in La Mesa within the LMSV boundaries, was actually chartered and overseen by the Mountain Empire School District. That District’s Superintendent at the time, Brian Van Zant, recently pled guilty to a felony conflict of interest charge after starting multiple charters outside his district and pocketed a portion of funds for his own consulting company.

Despite that tie, the school in its six year history since then has earned support of many attendees and their families. The La Mesa City Council recently voted to allow it to expand the number of students.

But recently, many school districts have filed lawsuits seeking to shut down successful charters operating within their districts without the official support of those districts.  Ironically, the more successful a public charter school becomes, the more Average Daily Attendance money the school district loses for each student that chooses a charter over a public school.

Many parents praised the education and caring attitude their children received at CPMS.

One mother said her son, who has autism, attended several previous schools before he “finally found a road to success” at CPMS. 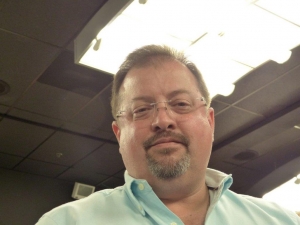 Kreg Kearley (pictured left) said his son was in private schools and San Diego Unified schools before coming to CPMS, which he praised as “far and away the best school he ever attended.” He praised his son’s teacher, adding, “To deny this would be a travesty.”  Later he told ECM that an administrator had advised him to take his son out of an LMSV school and said his son was denied GATE testing (gifted and talented education) by the district even after a personal meeting with the Superintendent.  “My son is bilingual and bicultural,” said Kearley, whose wife is French, but that the district wanted them to discontinue any French curriculum. His son, now 16, is in the international baccalaureate program at Granite Hills High School.

Multiple students said their grades went from mediocre to straight As, thanks to CPMS.   Another student stated, “Our teachers care about us forever.”

Yet another student noted that the current playground is a parking lot and classrooms in a church basement are small, yet praised her education as an “amazing experience” and asked that the new location be approved.

One woman choked back tears as she testified, thanking the school for “taking my kids one hour before school so I can get to my work on time. I would not get that support anywhere else.”

A volunteer at the school and founding member of the Kindness Challenge said CPMS is a “kindness certified school,” adding “I love these kids.” 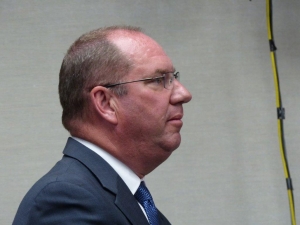 But Superintendent Brian Marshall (pictured right) addressed the board to insist that “laws and procedures must be followed,” adding that they weren’t followed in this petition.  “I’m upset that it came to this,” he said, adding that he asked to work with the school on the petition.

LMSV board member Rick Winet also testified in support of Marshall’s position. “I support denial of the petition,” he said, praising Marshall as “beyond reproach.”

After public comment, the County Board of Education members discussed the issues before voting.

Mark Anderson admitted he felt conflicted. “To all of us, nothing is more important than the education of these children,” he told dozens of youngsters seated on the floor at the front of the hearing room.  “We might be looking at the next Steve Jobs or Rosa Parks here.”   Despite the praise given for the school in testimony and that “rankings show something good happening here,” the “staff we rely on is telling me there are some challenges here that we need to work one.”

Alicia Muñoz commended the children for “your love expressed for your schools,” but added, “Other challenges needed to be addressed…before this got to where it is now.”

Rick Shea made clear, “We have to rule on specific findings,” adding that another charter recently came before the board with similar results.

After the vote, Kearley summed up the sentiments of many here, telling ECM, “I’m very disappointed in the decision.”