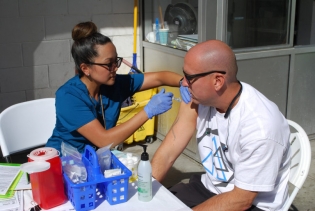 After four weeks with no new cases associated with the local hepatitis A outbreak reported, the San Diego County Board of Supervisors approved a motion Tuesday ending the local public health emergency which began September 1st.

El Cajon Councilman Gary Kendrick advised East County Magazine today that sunset language in its temporary ban on feeding the homeless in public places means the measure has officially expired, effective immediately.  So it’s now legal once again for organizations to feed the homeless in El Cajon’s parks or other public property.

The county outbreak is not over.  Local officials say they will continue to work with the Centers for Disease Control and Prevention and the California Department of Public Health on the efforts taken to control the outbreak.

“New outbreak activity has leveled off to near zero,” said Wilma Wooten, M.D., M.P.H., County public health officer. “The sustained vaccination, sanitation and education efforts we undertook will continue and we will remain vigilant to make sure that the outbreak activity doesn’t return. “We want to thank our local health care community, homeless service providers, non-profit and faith-based community partners, cities and other government agencies for working with us to bring the outbreak under control.”

The County will continue hepatitis A vaccinations at public health centers, jails and detention facilities, homeless tent shelters and locations where high-risk individuals congregate. Mass vaccinations will also be held for food handlers to further protect the public.

The total number of cases in the outbreak has remained at 577 with 395 hospitalizations and 20 deaths. From May to September, 2017 there were an average of 84 cases reported each month. In December, that number dropped to eight cases. No cases with symptom-onset in 2018 have been reported.