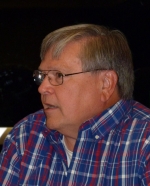 November 4, 2011 (Alpine) – Alpine Community Planning Group member George Barnett did not violate the County’s conflict of interest rules in voting on issues related to SDG&E’s Sunrise Powerlink, according to a letter sent by Jarrett Ramaiya, Planning Manager at the Department of Planning and Land Use. That’s because DPLU has now determined that “the ACPG, including any of their subcommittees, does not have the authority to vote on the Sunrise Powerlink project, or any related action of SDG&E.”

“It looks like my purgatory is over,” Barnett wrote in a letter to ECM after learning the news.

Barnett chaired an APCG Sunrise Powerlink Subcommittee. He is also President of the Back Country Land Trust, which accepted substantial funds from SDG&E including at least two grants.

Lou Russo, who filed a complaint alleging conflict of interest with Supervisor Dianne Jacob’s office, notes that Barnett did not disclose those funds to fellow planners or the public. Barnett cast several votes on Powerlink issues while on the APCG, including casting an advisory vote against the project itself, but also voted with the majority of the planning group to allow SDG&E to extend work hours.

Now, however, the DPLU has determined that since Powerlink and other utility matters are governed at the state level by the California Public Utilities Commission and the County has no jurisdiction over it, planners had no right to cast votes on the project or any other SDG&E-related action, therefore conflict of interest provisions do not apply. That policy would normally require public officials to avoid even the appearance of a conflict.

The DPLU decision reads in part:“However, the ACPG, including any of their subcommittees, does not have the authority to vote on the Sunrise Powerlink project, or any related action of SDG&E. Consequently, the conflict of interest provisions of Policy l-1 do not apply. ln addition, there is no evidence of a link between funds received by one group and the vote of another. Although Mr. Barnett is active in different groups in the Alpine area, this does not equate to a conflict of interest. The County does not find support for the accusations of a conflict of interest and there will be no further comment on this issue.”

It remains unclear why the County failed to inform planners sooner that the board had no right to cast votes on Powerlink issues. Russo continues to maintain that it is “absolutely a conflict of interest” noting that Barnett "never told anyone about these deals with SDG&E for years."

Barnett contends that SDG&E funds provided to the nonprofit he heads, which included money for education programs, did not influence his votes on the APCG. Since the recent disclosures, Barnett has recused himself from voting on SDG&E issues.

Supervisor Jacob offered this advice to public officials, according to the San Diego Union-Tribune: “You’ve really got to err on the side of caution and sit out votes that might be perceived as benefitting you, directly or indirectly.”

On that point, Barnett now agrees. In the future, he told ECM, “I will be exceedingly careful to think ahead as to possible consequences of what I do and say.”